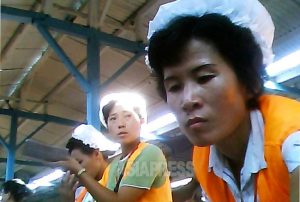 Female traders at Hyesan market in Yanggang Province where the products from Kaesung Industrial Complex had been traded in a large volume. Taken by ASIAPRESS in August, 2103.

It is reported that the North Korean government unlawfully started the operation of Kaesung Industrail Complex. It makes a large volume of textile products which are distributed to all over the country for sale. The reporting partners in North Korea reported that the individual middle men distribute the products and they are quite popular.  (Kang Ji-won/ISHIMARU Jiro)

A couple of partners investigated the domestic distribution channel for the products from the Complex through the meetings with textile middlemen.

Partner ‘A’ said “The products made from the complex are sold at the market. They used to operate the factories to meet the demands from China after the South Korean companies evacuated from the complex. But as the economic sanction made hard for the North to export, the goods became to be sold at the domestic market. The products used to be mostly underwear until the last fall and were sold at high price. (Now) All the kinds of inner wear including socks, but except gloves and hats, are available at the markets.”

South Korean media reported that the North is secretly operating a clothing factory owned by a south Korean company. Regarding the report, the North through ‘Woori Minjogkiri,’ a propaganda media targeting the South, insisted that they have every right to do whatever they want in the industrial complex. By saying “The factories in the complex will be vigorously operated,” they, manifestly, admitted their unilateral reoperation of the complex.

According to ‘A,’ the manufactured goods are sold without any logos or brands, just called “Complex Products.” The products are not distributed to other regions by organizations or companies, but by individuals, called ‘Donju.’ They carry the products from Kaesung where the complex is located to the wholesaler in Sariwon area. The wholesaler distributes the products to Hyesan, Chongjin, Kimchaek and Hamheung using container trucks. 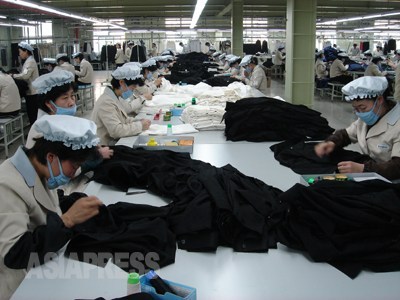 Popular because of high quality. Higher than Chinese goods in price

The products from the complex are expensive than the Chinese ones, but seem to be popular with high quality among the riches. Another reporting partner ‘B’ said that they began to produce the winter clothes from last November, which are also popular at the market. He added “The prices of the winter clothes from the complex are 300-400 RMB (KRW 49,880-66,507), but expensive one goes up to USD100. The price is two times more expensive than that of the Chinese good. The quality and design is superior to the Chinese product. Chinese clothes are made of ordinary textile, but the complex products are made of elastic textiles with 100% of goose feather which let them costlier. They may recklessly use the raw material of the factory owned by the South Korean company. But the package is said to be worse than that of China. The complex products are popular in the market as people recognize the goods are made of the South Korean material. But they don’t know that the operation of the factory in the jointly founded complex itself is not legal.”

The report by Radio Free Asia (RFA) in last October revealed that the North Korea began to operate the Kaesung Industrial Complex illegally. The South Government stopped supplying electricity to the North at present.