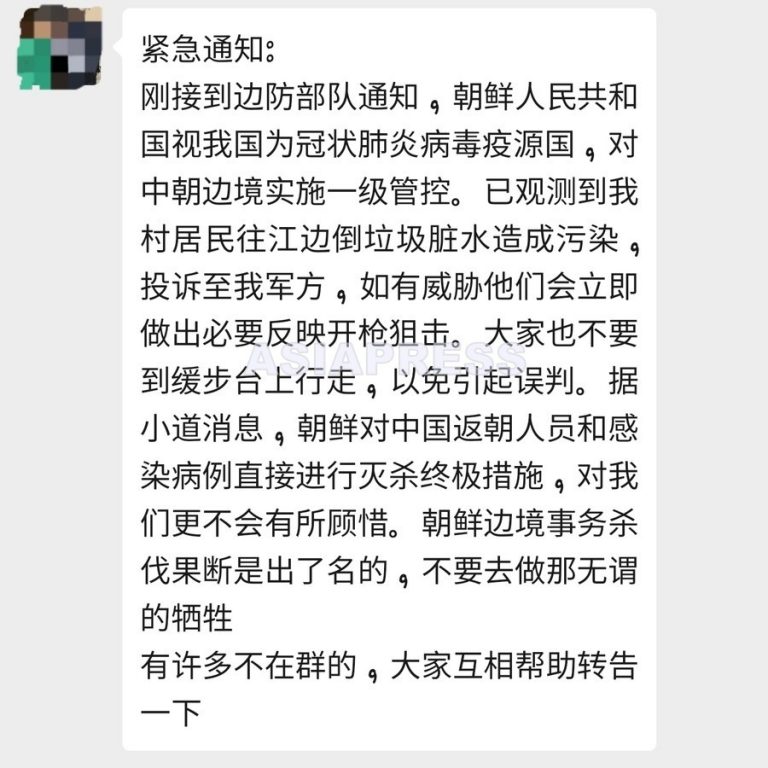 A message with emergency instructions sent to local residents by China’s Border Guard. Forwarded by the Chinese reporting partner on March 3. Photograph taken by ASIAPRESS

North Korean authorities have sent an official letter to Chinese counterparts, cautioning that border guards will fire without warning at hostile Chinese citizens if they commit “hostile acts” or dump potentially virus-spreading rubbish into the Yalu River. This information was first reported to ASIAPRESS on March 3 by a Chinese reporting partner living in Jilin Province.

According to the reporting partner, North Korean authorities delivered the warning on February 29, to officials of Changbai County, Jilin Province, on the Chinese side of the Yalu River.

The reporting partner explained, “The Chinese Border Guard then sent notices to residents of Changbai County, urging them to share the information widely. The notices warn not to approach the Yalu River, as the North Korean authorities have stated that they will fire without warning upon Chinese citizens who engage in hostile acts or dump sewage into the river, as a means of preventing potential coronavirus infection.”

According to the Changbai County resident, there have not yet been any cases of coronavirus infection across the border in Hyesan, Ryanggang Province. However, not a single resident of the North Korean border town has been seen by the river lately. The official notice sent by North Korean authorities has strongly demanded for the Chinese to prevent the virus from spreading by not dumping sewage into the river.

The Chinese Border Guard has now banned residents from approaching the Yalu River in order to avoid any potential incident at the border. According to the Chinese reporting partner, “the unusual North Korean warning is really a message to Chinese smugglers.”

Currently, Changbai County is limiting residents from leaving their houses to once every two days as a means of preventing coronavirus infection. At the same time, authorities are strictly controlling access to the Yalu River to prevent the possibility of North Korean border guards firing upon Chinese smugglers or others.

In early February, a group of North Koreans who had been smuggling goods between Pochon County and China was arrested. Of the smugglers, the three who had made the trip to and from China were executed. (Kang Ji-won)
Next page :Translation of the Border Guard’s message...

Next Page： ◆ Translation of the Border Guard’s message
1 2
Facebook Twitter はてブ Pocket Feedly
RECOMMENDATIONS
Kim Jong-un’s Furious Response to the Defection of 13 Restaurant staff
On April 8, the South Korean Ministry of Unification announced that 13...
＜Field Report On N.Korea＞ Delayed Restoration of Flood Due to Cement Shortage (3 Photos)
2016/Oct/17 North Korean state media such as Rodong Shinmun report ev...
＜Inside N. Korea＞ COVID Confession: Local Authorities Notify Public of Rising Coronavirus Cases in 3 Regions, Including Pyongsong and Sariwon
North Korean authorities are reportedly informing residents for the fi...
＜N. Korea’s COVID-19 pandemic＞ Reports of people dying following the lockdown of Hyesan, Yanggang Province…The authorities fail to provide medicine and medicine to those in isolation…The Kim Jong-un regime is intent to prevent information leaks about the situation
According to two ASIAPRESS reporting partners who delivered reports on...
＜Inside N. Korea＞ Theft of car parts is rampant in North Korea. Thieves immobilize vehicles by stealing tires, mirrors to sell on the black market...Few car parts make it over the border due to the pandemic
Throughout North Korea, the stealing of vehicle parts, including the m...
Profiles - ASIAPRESS N.Korea Reporting Team
Ishimaru Jiro Ishimaru was born in 1962 in Osaka, Japan. He is the Osa...