Public concern regarding the condition of human rights in North Korea has been increasing since the United Nation's Commission of Inquiry on Human Rights in the DPRK released their final report. The 372-page report, known as the 'COI Report', includes the hearings carried out at several cities in South Korea, Japan, the UK, and the US. At each hearing, thorough interviews were made with representatives of several organizations, groups, institutions and individuals to gain detailed information on the human right abuses of the North Korean state.

The report contained testimonies by defectors, families of the abductees and human rights organizations, including Amnesty International. I was called as a speaker for the hearing in Tokyo, and provided analysis on human rights and food conditions by presenting video footage taken by our North Korean reporters.

The North Korean ministry of foreign affairs promptly reacted to the COI Report and denied all the allegations as follows;

"The DPRK categorically rejects this 'report', as it does not deserve even a passing note. The 'report' misrepresents the true picture of the Korean people enjoying genuine rights and is peppered with sheer lies and fabrications deliberately cooked up by hostile forces and riff-raffs such as some 'elements with ambiguous identities who defected from the north', escaped criminals after committing crimes against the country to earn money." (The statement of DPRK Ministry of Foreign Affairs - 21. February.)

The North Korean government is taking a consistent stance as it repeatedly states; "There is no human rights issue in our country".

However, there are 27,000 defectors in South Korea and other countries. They are living witnesses. There is no doubt that the systematic and widespread human rights violations have been and are being committed by the North Korean state. In particular, the political prison camps are the most serious and prominent problem that the international community is concerned with. 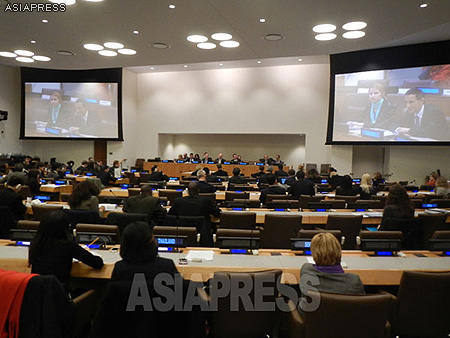 The criminal law of the DPRK has a chapter on 'crimes of anti-state and national treason', which prescribes crimes of subversive conspiracy, terrorism, anti-state propaganda and agitation, treason against the homeland, treason against the nation, and spying. Article 61 of the criminal law prescribes,
"A person who, with anti-state purposes, launches propaganda and agitation shall be punished by reform through labor of less than five years. In cases where the person commits a grave offence, he or she shall be punished by life-term reform through labor or the death penalty, and confiscation of property."

For example, one who engages in activities such as giving a public speech, distributing flyers or writing literature against government policy, will be arrested and punished according to the current North Korean law. A person who commits these acts is considered as a 'political prisoner', to be punished by criminal law. (This is according to the article of criminal law, revised in 2004. The criminal law was further amended in 2012, but the revised articles are not publicized. The above-mentioned Article 61 seems to be the current Article 60.)

The accused that is sentenced, according to the criminal law, is sent to a correctional facility called a kyohwaso 교 화소, which is the equivalent of a prison. The facility is run under the jurisdiction of th e Ministry of People's Security (the police). The state has unconditional legal basis to punish any acts arising from individual political beliefs or thoughts, in the name of 'crimes of anti-state and national treason'. This can be seen in other countries, too, and is regarded by many as a 'backward political punishment' system.

Unted Nation's Commission of Inquiry on Human Rights in the DPRK has released the final report in February 2014. The report was presented at the UN Human Rights Council. 'COI Report' can be downloaded from; UN/OHCR - COI

Treason against the Leader is an extralegal, political grave offense
What is the peculiar, extremely serious and widespread in North Korea, is the issue of political crimes. A huge number of arrests, detentions, and executions are carried out on a large scale. This extralegal detention facility is the so-called a political prison camp, known in Korean askwanliso 관 리소. The jurisdiction for this facility is not under the ordinary police, but under the State Security Department (secret police - intelligence service).

The UN's COI Report explains that there are an estimated 80,000 and 120,000 political prisoners currently detained in four large political prison camps, while hundreds of thousands of people have perished in the prison camps since their creation, more than 55 years ago.

Large numbers of people have been punished without any warrant and detained without trial. It remains unknown what happened to them afterwards. A person sent to the kwanliso is considered to have committed acts of treason and disloyalty against the 'mono-absolute Leadership', succeeded through three generations, from Kim Il-sung to Kim Jong-il to the current leader, Kim Jong-un.

In North Korea, there is a set of 'commandments' that compel people to fall in line behind an absolutization of Kim Il-sung's ideology. Nothing short of absolute obedience to the leadership is demanded. These commandments are known as the 'Ten Great Principles to establish the monolithic ideology system of the Party', and became enshrined in statute in 1974. The Ten Great Principles are the codification of the supreme rule of North Korean society, which exists beyond the constitution, law and bylaws of the Korean Workers' Party.

To be sent to a kwanliso is known as 'revolutionization'. It is a common, in testimonies offered by defectors, to hear that, by the 1990s, any word of discontent on their living circumstances, or mockery of the Leader was regarded as a detainable offence, with the offender arrested as a 'reactionary of words' (mal-bandong 말 반동). It is not a rare occurrence that even ranked officials of the Party or the military are criticized for a lack of loyalty to the Leader, and sent for 'revolutionization'.

The rules existing above statutory law brings further to relief the extent of the intentional abuses of the state against its citizens. A defector currently residing in Japan testified as follows;

"As a way of bettering your rivals, accusing him or her of a lack of loyalty to the Leader is effective. This happens far too frequently. In the 1970s to 1980s, some employees of the State Security Department would often carry out the arrests of Koreans returned from Japan, accusing them of acts of 'reactionary of words'. They would be sent together with their family to the camps. It was a means for these employees to confiscate and embezzle the private property of the incarcerated individuals."

In other countries the law stipulates the political crimes in which a person is accused of treason against the state and nation. However, in North Korea the state created the extralegal 'commandments' which function as a device compelling loyalty to the absolute Leader. 'Revolutionization' is a horrific system used to disappear 'commandment breakers'.

'Public execution' of Jang Song-taek is legal punishment, but the punishments of his affiliates continues behind the scenes
Jang Song-taek, who was purged last December, was at first expelled at the expanded meeting of the politburo of the Korean Workers' Party. He was accused of acts antiparty and anti-revolution in nature, and the violation of the monolithic ideology system of the Party. Subsequently, at the special military tribunal of the State Security Department, held on 12th December, the death penalty was given to Jang and the sentence was promptly carried out. It was announced that his acts of conspiracy to subversion of the state fell afoul of Article 60 of People's Republic Criminal Law. It was a punishment according to the law.

Why was Jang not executed secretly through extra legal treatment?
He was the uncle-in-law of Kim Jong-un, and a powerful man. When considering the reaction both inside and outside of the state, it is presumed that the decision was made to justify the purge, there was a necessity to punish Jang according to the rule of law, but not by extralegal treatment. Another reason for the pubic execution of Jang was to show that there is no mercy for those who do not obey the new commandments of the monolithic leadership system of Kim Jong-un.

After the Jang's execution, a massive purge was conducted in which a considerable number of Jang's affiliates were punished. Our North Korean undercover reporting partners repeatedly reported the imprisonment of these affiliates in the correctional facilities and kwanliso, and banishment of others from the city to the rural areas is ongoing. Adding to the legally punished political criminals, an unknown number of people have been secretly eliminated, extralegally, as 'political criminals who broke the commandments', the exact number of these people is also unclear.