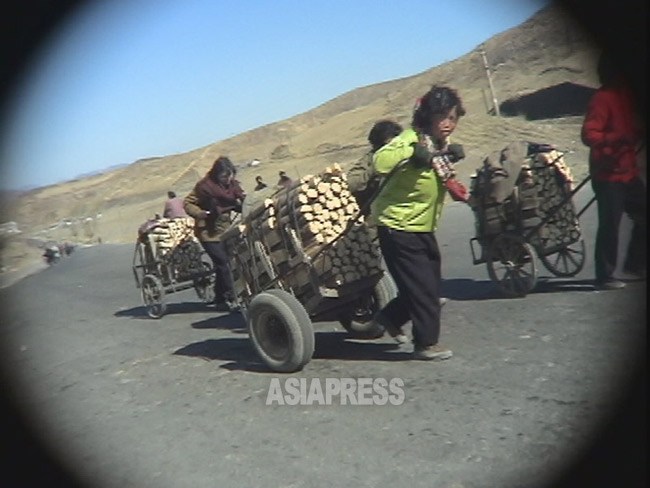 Following the completion of the Party Congress, an ASIA PRESS reporting partner living in a Northern province of North Korea called us. He sounded as though he were in distress. (ISHIMARU JIRO)

“Kim Jong-un declared a 10-year war to revive the forests. He’s taking away the fields in the mountains and ordering that people plant trees,” He said.

People who have visited the Sino-Korean border and looked into North Korea will be aware that North Korean mountains lack trees. Even the steep sides of mountains are covered in a patchwork of fields. These can be observed even from the Chinese side of the border.
Related article: <People Struggle To Collect Firewood for Winter>

In the 1990s, the North Korean food distribution chain (the Public Distribution System) ceased functioning. To feed themselves, people cut down trees on nearby mountainous areas to clear land for planting crops. After access to coal was cut off for ordinary citizens, people were forced to cut down more trees as fuel for cooking and heating.

Kim Jong-un’s father, the late Kim Jong-il, ordered a ban on such slash-and-burn practices. However, his orders were largely ignored, as people were willing to do whatever they needed to in order to survive. Food was of utmost importance and illegal slash-and-burn farming practices were a means of securing a food source for farmers and poor people in the cities. As such, government officials overlooked the illegal cultivation in return for bribes.
Related article: <Compulsory Collection of Harvest for Military Supply – Farmers’ Discontent Growing>

Every April, people burn off land throughout the North Korean mountains. They do this to kill weeds and fertilize the soil with ashes. As a result of the burns, at night the mountains are tinted red. It is a scary sight, but beautiful as observed from the Sino-Korean border.

This man-made mountain fire can be seen in satellite photos. News of the mountain fires is broadcast in the North Korean state media every April.