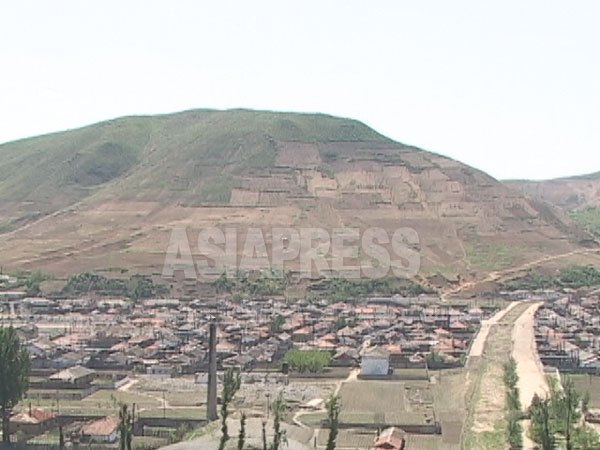 Mountains in Hoeryong City, North Hamkyung Province. Even trees at the peak of the mountain have been cut down. (Taken by ISHIMARU JIRO on June 2005).

“Now, it is our irresistible resolve and will to transform empty mountains into evergreen mountains; into treasured, golden mountains within 10 years. ……. We have to choose: will our mountains be in ruins forever? Or will they stand green again.

After Kim’s declaration, the government started to enforce laws against slash-and-burn farming all over North Korea. However, this is a matter of life and death for ordinary people. Consequently, last year, as long as trees were not cut down, in return for bribe, agriculture officials looked away if a person was cultivating short crops.

Since then, the writer of this article confirmed that many farmers have given up slash-and-cut agriculture, though tree replantation is yet to take hold.

The tree replantation campaign continued this year; the regulations on planting are strict. And as the directive came from Kim Jong-un, there is fear amongst high-ranking cadres that they may be prosecuted if results are not shown early on.

“Now people are forbidden to enter the mountains. Cadres have been ordered to confiscate all the mountain fields and crop planting has been banned. Work places and individuals are expected to fill a planting quota, but due to the shortage of tree seedlings, it seems unlikely that people will be able to do this,” said ‘A’, a reporting partner for ASIA PRESS.