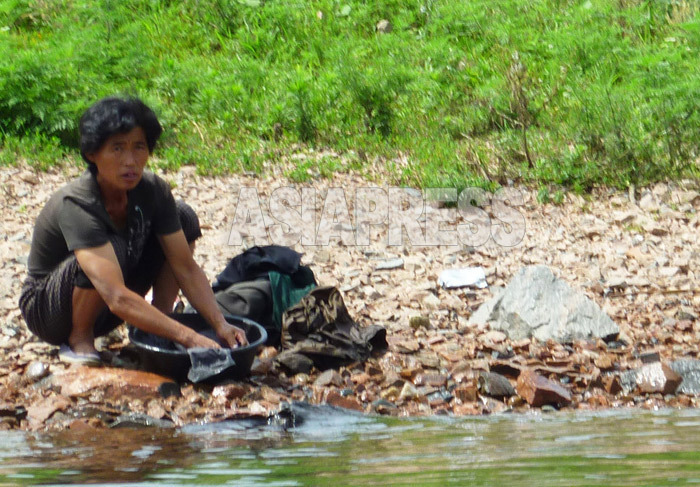 (Photo) A woman washes clothes in the Yalu River. Only the wealthy can afford an electric washing machine. Photographed from the Chinese side in July 2017 by ISHIMARU Jiro (ASIAPRESS)

An ASIAPRESS investigation found that the supply of electricity to residential districts in the northern region of North Korea is improving. Since November of last year, the power supply had been totally shut off across wide stretches of residential areas, with ‘power-saving’ measures instituted in multiple cities. (Kang Ji-won/ISHIMARU Jiro)

In Ryanggang Province, the city of Hyesan has also seen improvements since late May, with electricity being supplied for an average of 7 hours a day since early June, often times being available for up to 10 hours.

One reporting partner described neighboring residents’ delight at being able to finally ‘live like people’ again, saying, “Electricity was first supplied to the Samjiyeon tourist zone construction site but has since been diverted, temporarily, to residential areas. However, there are also regions where transformers are not working and zero electricity is being supplied.”

Though the capital, Pyongyang, has always been supplied with electricity as a priority and has not been subjected to ‘power-saving’ measures, it too has experienced difficulties. For the past 6 months, Pyongyang’s working-class could only use 4-6 hours of electricity per day- though the situation is said to have improved since the end of May.

A reporting partner who left Pyongyang for China, told ASIAPRESS, “It’s inconvenient because the electricity is usually supplied between 8 p.m. and early morning, however, it has improved a bit recently. During the daytime, the electricity is being used to operate pumps, as part of the drought countermeasures.”

The reason behind the improved power situation is not totally clear. However, a reporting partner in Pyongyang reported hearing that “China is supplying us with electricity produced by hydroelectric power plants along the Yalu River.”

North Korea also suffered from severe power shortages last year, before the situation suddenly improved in June and July, exactly as it did again this year. At the time, intelligence agencies and experts in South Korea hypothesized that the improvement was due to “power from the Sup'ung Dam hydroelectric plant being supplied to North Korea free of charge”.
Next page : Crudely calculated electricity bills…