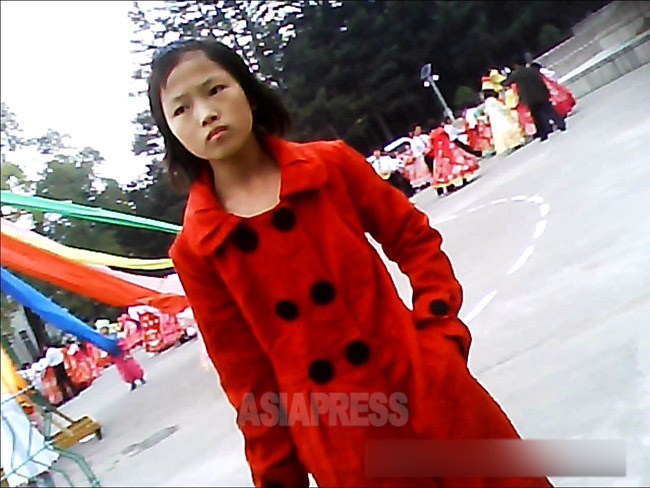 (Reference Photo) A middle school student in Hyesan City. Her red coat looks to be influenced by Chinese and South Korean fashion trends. Photographed in October, 2013 by ASIAPRESS

In the northern city of Hyesan in Ryanggang Province, 16 people, including 10 secondary school students, were dragged before a crowd of 500 mobilized students to be publicly condemned.

According to a reporting partner living in Hyesan City, speaking with ASIAPRESS on July 6, the “public denouncement rally” was held on July 2 in the downtown plaza facing the Hyesan Theater.

After speaking with a contact who was mobilized for the event, the reporting partner told ASIAPRESS, “About 500 middle school students and local residents were mobilized. 7 men and 9 women were dragged before the crowd- about 10 of them were secondary school students. They were condemned for either watching, copying, lending, or selling American and South Korean dramas and movies. A police official read out their charges, explaining it that they have arrested a suspect followed by one by one.”

The reporting partner continued, “The officials say that people who watch the dramas believe that they are seeing is true. And that, therefore, we must establish a full-scale reporting system for preventing this phenomenon from extending its roots in our society. They stressed that parents must also educate their children properly so that they do not go down this bad path.”

The 16 accused are said to be currently under further investigation and will be punished according to the severity of their crimes.

“If the parents of the accused are party members, they will be expelled from the party and from their workplaces as well,” said the reporting partner.

There was a major incident earlier this year, in March, when it was discovered that young North Koreans in Musan County were secretly watching and distributing the hit South Korean film, “A Taxi Driver”. Since then, the Kim Jong-un regime has pushed for inter-Korean dialogue while maintaining a strict attitude towards the penetration and spread of South Korean culture. (Kang Ji-won)

Facebook Twitter はてブ Pocket Feedly
RECOMMENDATIONS
＜Inside N. Korea＞ “Information was sold beforehand to the Americans”...Rumors Spread of Executions as Regime Shifts Responsibility for Failed Hanoi Summit
◆ They say the reason for failure was that “Information was sold to th...
Korean People's Army Extends 10 Year Service Term To 11 Years
2014/September/30 Written by ISHIMARU Jiro, Editor in Chief, Rimjin-ga...
Media Reviews & Quotes
Rimjin-gang (Japanese & English Edition) Media Reviews And Feature...
＜Inside N. Korea＞ Freedom Fashionistas: Young Citizens Rebel Against Regime for Freedom of Style
Recently, resistance has been mounting among young people against the ...
＜Latest Report from N. Korea＞ Regime Aims to Block Coronavirus at Border as Local Hospitals and Populace Remain Woefully Unprepared for Potential Outbreak
The North Korean authorities have announced through state media that t...
＜Inside N. Korea＞ Missing Medicine: Country on Verge of "Medical System Collapse" due to Rapid Depletion and Blocked Imports of Drugs
◆In addition to the depletion of Chinese products, there is a ban on a...
Love Thy Neighbor: N.Korean Public Confused as Regime Prohibits Criticism of China
◆ Is China not the “1,000 year-old enemy”? Since mid-January, the Nort...
Rising discontent as control reinforced to prepare the 7th Workers Party Conference in May… Forced labor to the runaways from their work places and coerced savings to banks…
Declaring nationwide 70 days battle (*1) to prepare the Workers’ Party...
＜Inside N. Korea＞ Major Power Outages Continue Across Cities as Electricity Supply to Residents is Cut Off Drastically…Why?
The supply of electricity to the residents has deteriorated further. T...
N.Korea IT Report - PART2: Diffusion of South Korean Content Through Mobile phones
2015/July/20 Written by LEE Jin-su, Editor; Rimjin-gang and ISHIMARU J...