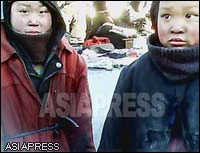 Another woman had come across the border from Pyongyang. She told me in another interview how the food situation is getting more acute even in the country's capital.

"Even Pyongyang citizens, who are very privileged compared with other cities, have not received food rations since last autumn. Everybody has to earn their cash by doing private business to different degrees. Those who do business in the market are compelled to submit rice for the military."

Kim also recorded the scene of a quarrel in the market, when an officer responsible for the market fights with a woman merchant as he tries to compel her to give rice for the military.

Kim's market images prove that quite a large amount of rice is being sold. White rice, corn, pork and liquor bottles are on display in the open-air market.

So, while the North Korean state growls about the military-first policy which prioritizes the military above all else, while soldiers suffer from serious hunger and Pyongyang citizens do not receive their food rations, large amounts of food is still being sold in the market.

Food sold in the markets is privately-owned, of course. On the other hand, (malfunctioning and inadequate) rations for the military and other state institutions are state-owned. This shortage of state-owned food reveals that the North Korean regime is faced with serious financial problems. The food which is running out during Bori-koge is state-owned. So it does not mean that all the food in North Korea has been eaten.

* The North Korean food issue is not a matter of absolute shortage; rather it is a matter of distribution and the food rationing system, which is the responsibility of the state.

These people who have been abandoned by the state rationing system are begrudgingly permitted to engage in trade. They get access to food by paying cash for it in the market.

On the other hand, those who cannot cultivate any kind of business and have to rely only on the rationing system for access to food, such as middle- and lower-ranking soldiers, quickly become malnourished when state-owned food runs short.

Kim's market images prove that quite a large amount of rice is being sold. Sacks of white rice and corn on display in the open-air market.
(January. 2011. North Pyongan Province, by Kim Dong-cheol.(C)ASIAPRESS

The government cannot feed the military and Pyongyang citizens from agricultural renders alone. When food runs short, this shortfall has to be imported on commercial terms, with money which the government does not have, or it must set its eyes on the "privately-owned" rice in the market.

Thus, they compel merchants to contribute rice for military procurement. On top of that, they ask the international community for food aid.

In fact, the current food shortage issue in North Korea can be attributed to the following causes;

1: The financial distress of the state.

2: People having no way to get cash income. Ordinary citizens engage in few business activities.

The ultimate solution is for the government to adopt a policy of reform and opening, of course. This is required to guarantee the people's economic activities. However, it won't come about in a hurry.

This June, there is the possibility that the international community, especially South Korea, the U.S. and EU, will launch food aid missions to North Korea. Most of the socially vulnerable, including the elderly, sick, disabled or pregnant, infants and children do not have methods by which to earn a living. They have great difficulties accessing food even though it is on sale in the market. As a result, many could become malnourished and then, in the worst-case scenario, starve to death.

There is no doubt that aid is necessary for these socially vulnerable people. The question is how international relief can reach those in need. It is important to demand that the North Korean government promise to abide by rules governing food distribution monitoring to prevent embezzlement and siphoning off by other institutions. For that purpose, international missions should be guaranteed free monitoring activities at every station and level.

I would like to propose that all responsible institutions and parties including the United Nations and NGOs negotiate with the North Korean government to construct a framework allowing for direct aid to beneficiaries.

In addition, we must lobby the North Korean government to permit UN institutions and NGOs to hire the necessary personnel for aid activities directly at every location.

By creating employment opportunities in this way, many will get cash income, and from that will come broader access to food in the market.