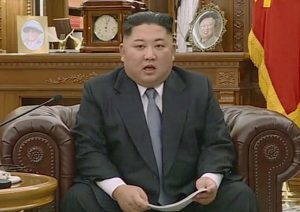 Kim Jong-un sits to give his New Year’s address, broadcasted by the Korean Central Broadcasting Station on January 1, 2019.

◆ Is Kim Jong-un portraying himself as a ‘humble’ leader?

Thought to be born on January 8, 1984, Kim Jong-un recently spent his 35th birthday in China. How did the North Korean people commemorate their leader’s birthday? On the afternoon of Kim Jong-un’s birthday, a reporting partner from North Hamkyung Province spoke with ASIAPRESS over the phone (Kang Ji-won).

The partner reported, “On the 8th, orders on how to commemorate Kim Jong-un’s birthday came down through the Party. The instructions decreed that there should be no public holiday to mark the birthday and specifically forbade state enterprises and individuals from holding celebrations. All North Koreans were instructed to attend work as normal.”

But what is the true motivation behind the order not to celebrate? According to the reporting partner, “It would not have been acceptable to create a festive atmosphere just for Kim Jong-un’s birthday.” Moreover, there had been no special events to celebrate Kim’s birthday in the past.

Ironically, the ban on celebrating Kim Jong-un’s birthday is thought to have been decreed with the intention of increasing public idolization of the leader. Away in China on his birthday, the ban helps to portray Kim Jong-un as a ‘humble leader’, dutifully performing a public service to his country. Rather than venerate Kim Jong-un, the regime has, for the first time, marked the leader’s birthday by distributing gifts to children. According to our reporting partner, “Kindergarten and elementary school students were all given sweets at special ceremonies at their schools.” After 7 years, it would appear that this particular North Korean socialist tradition has finally been carried forth into the Kim Jong-un era.

※ In North Korea, on Kim Il-sung's birthday, April 15, and on Kim Jong-il's birthday, February 16, boxes of sweets were given to children at special school ceremonies.
Next page:Kim Jong-un's New Year's greetings...