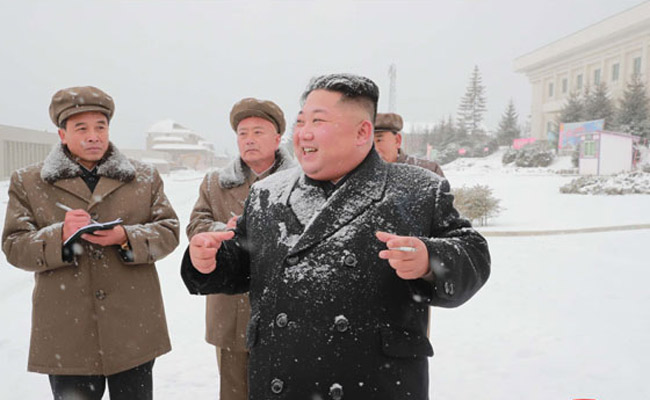 Kim Jong-un frequently visited Samjiyeon during construction. However, it seems the project did not go to plan. This photo shows Kim Jong-un visiting the area during a snowstorm. Published by the Rodong Sinmun on October 30, 2018.

Our local reporting partner in North Korea reported the following on December 5th: "All mobilized workers of the ‘storm troops’ in Samjiyeon were ordered to return home for ‘vacation’. However, as they were not given money for transportation, the markets and train station in nearby city of Hyesan are awash with demobilized workers. There are great concerns because the construction has come to a halt due to the frigid winter conditions, and meals and accommodation for the workers are no longer provided. Right now, only the armed forces remain at the construction site. Consequently, the Samjiyeon construction project has not even made it past the first phase in the face of financial difficulties."

On December 7, ASIAPRESS received a separate report from another reporting partner in Yanggang Province. This report confirmed the demobilization, adding that the authorities in Hyesan City eventually sent workers on freight trains to a key railway hub in Kilju, North Hamkyung Province.

'Storm troops’ refer to special construction units that are mobilized for national construction projects. There are permanent units, mostly composed of workers from youth organizations, who serve for 3 years, and temporary units composed of workers and party members, who are called upon as necessary. For the construction of the special tourist zone in Samjiyeon, however, the regime established the ‘2.16 Storm Troops Division’, named in honor of Kim Jong-il’s birthday, and recruited workers from workplaces and party organizations across the country, including Pyongyang.
Next page: a total of 80,000 people were mobilized for the Samjiyeon project…