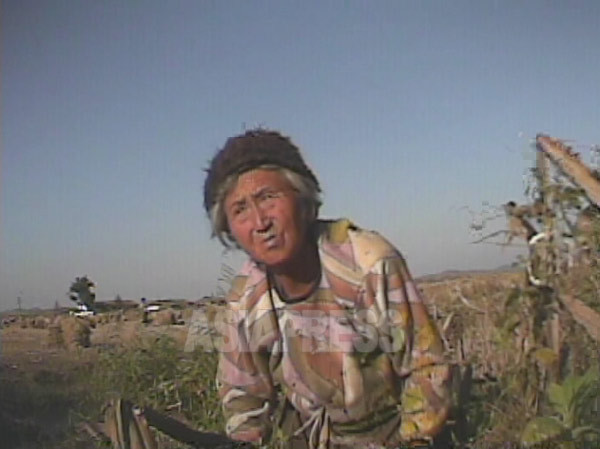 An elderly man picking up ears of corn in a harvested field. Photographed in a farm village in North Hwanghae Province in October, 2008 by Shim Uicheon (ASIAPRESS)

◆Stuck on a farm for a lifetime

In North Korea, there is the word ‘nongpo’. It is a word spoken with disdain and pity to describe the cooperative farmers in the lowest level of North Korean society.

When urban people are expelled for political reasons, most are sent to the remote countryside to become cooperative farm workers.

"If you are placed on a farm, you can never return to the city in your life. Like a cow, you will only work.”

For just one family member’s political problems, an entire extended family will face banishment to the countryside, a women tells us.

Having judged that “My daughter and son’s lives are over,” the woman decided to escape and now lives in the Kansai region of Japan. 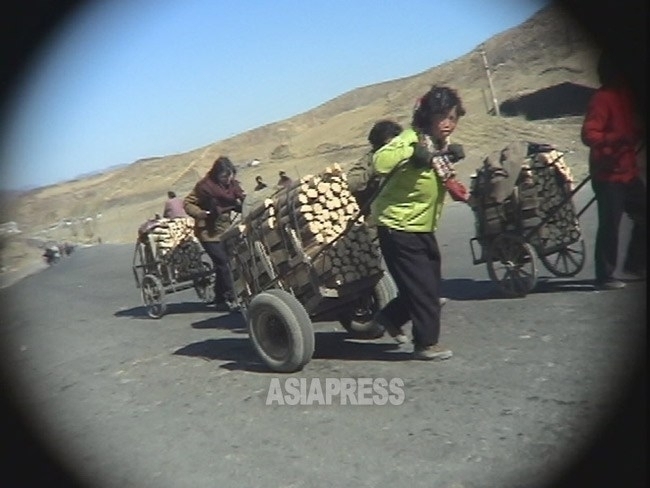 Rural women carrying (fire woods)fir trees to Chongjin City from distant farmland. They say they are pulling them 20 kilometers by cart for cash. Taken in April, 2005 by Ri Jun (ASIAPRESS)

Next page: Women gathering compost outside in the cold...

Next Page
1 2
Facebook Twitter はてブ Pocket Feedly
RECOMMENDATIONS
＜Inside N. Korea＞ Cinema Sins: 10 Students Arrested, Condemned Before Crowd of 500 for Watching Foreign Films
◆ Kim Jong-un regime aims to block South Korean culture In the norther...
Polling Stations Under 24 Hour Surveillance As The Station's Notice Boards Vandalised
The Forthcoming Election in North Korea: 2014/March/07 Written byISHIM...
＜Inside N. Korea＞ “People are starving”: South to Send Support...But Will Food Reach Those Most in Need?
◆ Exploited citizens going hungry The World Food Program (WFP) and oth...
＜PHOTO REPORT＞Sino - N.Korea Border: ［PART3］Tensions High In The Border City As A Special Team is Dispatched For Crackdowns
2014/April/20 (This report first appeared in the Korean and Japanese e...
＜Inside N. Korea＞ More Elderly and Children Begging in the Streets…Girls at Greater Risk of Sexual Abuse
The population of vagrants, known as "kochebi," has been on the rise ...
＜Inside N.Korea＞Execution of Border Guard Officer Accused of Overlooking Defectors
On April 4, a reporting partner of ASIAPRESS, in a northern area of No...