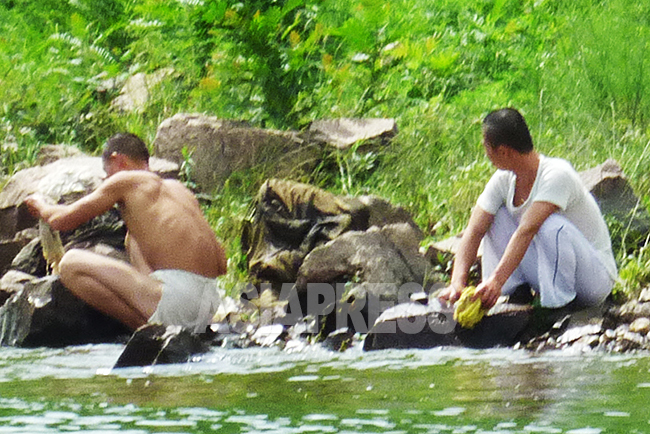 Photo: Young, gaunt soldiers bathing and washing their clothes in the Yalu River. Taken in July 2017 from the Chinese side of the border in North Pyongan Province (ISHIMARU Jiro)

Along the upper reaches of the Yalu River lies a hotbed for smuggling, where trading companies under orders from "Department 39" of the North Korean government do deals at the border with the tacit consent of the Chinese authorities.

The most active spot on the border for smuggling is near Nuppyong, about an hour's drive downstream from Hyesan, the central city of Yanggang Province.

Our investigative partner living in Yanggang Province described activity in the area thusly: "From night until morning, banned products come across the border wholesale. By bus, truck, or train, electrical products and other goods come through. The vehicles return from North Korea loaded with textile products, seafood, herbal medicine, timber, and ore." 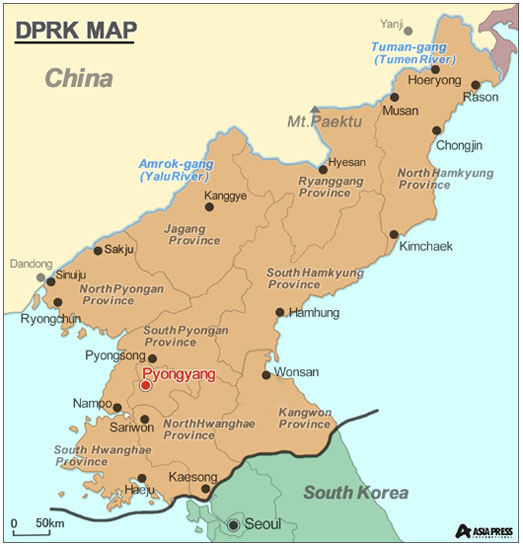 In mid-September, there was an incident in which an officer died while attempting to raid smuggled goods. Our partner in North Korea made inquiries in the area and reported that, "One night, a sergeant of the border guard tried to steal a truck loaded with herbal medicine from the Chinese side of the border, but died when the truck went over a ledge and crashed."

Along the upper stretches of the Yalu River, smuggling has long been prevalent but, as economic sanctions became tighter this year, state agencies took over the smuggling channels previously used by civilians. Border guards were forced to crack down on private smuggling and could no longer receive bribes for turning a blind eye to smuggling, losing a vital source of supplemental income. Without the cash from bribes, malnourishment has become widespread across the military, with the units not being sufficiently supplied with food and daily necessities by the regime.

Reflecting on the gravity of the crisis, our reporting partner said, "If a sergeant, rather than one of the soldiers, has to steal smuggled goods to get by, the soldiers must be having a very hard time of it...this is a very serious situation. The trade companies are posting guards to watch over their smuggled goods but can't prevent theft by both impoverished civilians and soldiers." (Kang Ji-won)

Facebook Twitter はてブ Pocket Feedly
RECOMMENDATIONS
＜N.Korea Crisis＞ Why is there a Food Shortage Crisis in the Breadbasket Region of Hwanghae? (PART2)
2012/May/10 Written by LEE Jin-suFarming Villages' Crops Taken by the ...
＜Inside N. Korea＞"The government distributes emergency rations to starving farmers…“Some farmers are so malnourished they can’t stand up”
ASIAPRESS informed its readers about the severe food shortages in Nort...
“Secondary school textbooks issued under the Kim Jong-un regime” DVD Book Now!
ASISPRESS collected 65 secondary school textbooks published under the ...
＜Inside N.Korea＞ Expansion of the market economy as the driving force behind social transformation--based on sources from inside N.Korea. (PART7) Information from outside being commodified and spread across the country. The government is losing control of the movement of citizens. by ISHIMARU Jiro
2016/Dec/28 5-3 The control of information is being weakened The Nort...
＜Inside N. Korea＞Authorities Concerned as Starving Soldiers Brazenly Attack Farms and Homes to Steal Food
In North Korea, the harvest of corn, which is the country's staple fo...
＜N. Korea Pro Report (Part 2)＞ How is North Korea’s Economy Faring in the Face of the Coronavirus Pandemic and Continued Sanctions? A Look at the Regime’s Revenue Schemes
◆ Kim Jong-un regime focuses on “exploiting its people” The Kim Jong-u...