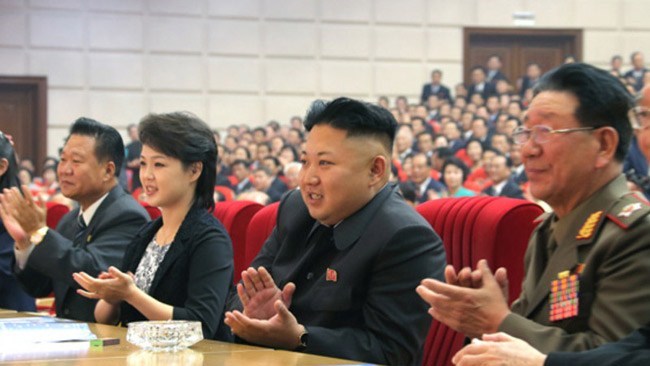 Kim Jong-un and his wife, Ri Sol-ju quoted from Rodong Newspaper on may 2014

ASIA PRESS, amid of flow of news from South Korean media, covering the defection of Thae Yong-ho, minister of North’s mission at London, asked opinions from reporting partners in North Korea. The news was sent to them via e-mail in advance. A telephone interview was made with a middle aged female reporter in Northern area of North Korea on August 19.

Q: What do you think about the defection of the minister, Thae Yong-ho? Why did he go to the South even if he had a good life in foreign country?
A: Well… I don’t know what else he needed….

Q: It is said that he was supposed to return to North Korea.
A: That is why he decided to escape. If he comes back (to North Korea), there would be no chance to go out again. Who would like to live here? Well, everybody will try to capture him.
Related article: DPRK high-ranking state officials ordered to attend seminar against escaping the country: frequent escapes concern Kim regime

Q: What do mean by “capture?”
A: He must be infected by capitalism as he had lived a long life in foreign country. Wouldn’t they tolerate him as he is? He should go through the revolution study process under whatever charge they want to put on him. Who would really like to come back?

Q: What do you think about the fact that Thae decided to flee for the future of his children?
A: It is quite natural. Every parent tries to earn money only for better future of their kids. Do you know how far better enlightened the kids are these days? As Kids here in North watch South Korean movies, they know the South’s situation very well. The parents can’t catch up with the kids’ idea.

The reporting partner said that minister Thae’s defection is natural. She thinks that the reason for the defection is due to the political oppression by the authority and poor living condition. When we had interviews with North Korean people on occasion of group defection of 13 North Korean employees in China on April, this reporter said without hesitation “if I had been in China, I must have thought of defection too.”
Related article: Kim Jong-un’s Furious Response to the Defection of 13 Restaurant staff

North Koreans are losing their confidence in the future of their motherland from their hearts as public sentiments are worsening by persisting poor living condition and oppressive ruling by young leader.