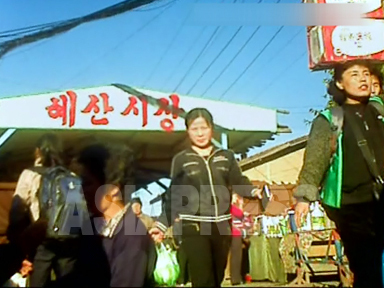 A market in Hyesan City, where rumors of the execution of 3 smugglers are spreading. Photographed in 2012 by ASIAPRESS

“7 people were arrested for smuggling along the Chinese border. 3 of them- the ones who had gone across to China and back- were shot to death.”

On February 11, a reporting partner living near key smuggling areas along the Yalu River in Ryanggang Province, gave the first of such reports.

News of the executions spread quickly within Ryanggang Province. However, with the specific date and location of the executions still unknown, it is possible that such rumors were falsely generated and leaked by the authorities to instill fear among residents. As such, ASIAPRESS worked to gather more information.

A few days following the first report, another reporting partner in the province spoke with ASIAPRESS, passing on words he had heard from a police officer.

“The day of the incident was February 4, and it took place in Hwajeon Village, in Ryanggang Province’s Bocheon County. Of the 7 smugglers arrested, the 3 who had been making border crossings were shot behind closed doors as punishment for their ‘rebellious act.’ Their bodies were cremated immediately after execution to avoid any risk of coronavirus infection.”

The Kim Jong-un regime has blocked off all border crossings with China since late January (or February 1, according to other reports) in order to block the spread of COVID-19 from China. With imports cut off, however, Chinese goods have all but disappeared from local markets, causing the prices of remaining stock to soar. As such, more people are considering smuggling as a way of making money.

According to the reporting partner in contact with the policeman, citizens were given the following warning against smuggling on February 10 at inminban (local political unit) meetings.

“As the whole country is strengthening its defenses and initiating quarantines to block the coronavirus, it is tantamount to treason to make money through smuggling. Such acts will be dealt with according to military law.”
Next page :Rumors of Quarantined Official Shot During Failed Escape...

1 2
Facebook Twitter はてブ Pocket Feedly
RECOMMENDATIONS
[Video Report] Chinese products and currency are playing a vital role in N.Korean market
Taken by our team ‘Mindeulle’ (ASIAPRESS) In October 2013, an ASIAPRES...
＜Photo Report＞ Kim Jong-un Spread Enemy’s Culture: Mickey Mouse and All-Female Band Wearing Miniskirts
2017/Feb/6 The United States (U.S.) is considered as the “Mortal Enem...
＜Inside N. Korea＞ Nationwide Warning Issued After Electric Bike Battery Explodes, Killing Family of 3 in Pyongyang
An electric bicycle battery exploded while being charged in a Pyongyan...
＜Inside N.Korea＞ Expansion of the market economy as the driving force behind social transformation--based on sources from inside N.Korea. (PART8, FINAL) The “class system” is being shaken. by ISHIMARU Jiro
2016/Dec/29 6 Expansion of the market economy shaking the “class syst...
＜Inside N. Korea＞ Power Play: Is China Responsible for Returning Electricity to Border Residents?
An ASIAPRESS investigation found that the supply of electricity to res...
＜Inside N.Korea＞ Kim Jong-un’s popularity on the rise
North Korean leader Kim Jong-un’s popularity is on the rise, according...
＜Inside N. Korea＞ Exchange Rates for Foreign Currencies Skyrocket After Resumption of Railroad Trade; U.S. Dollar rises 24%
Recent reports indicate that the prevailing exchange rate between the ...
Forgotten Faces: What Happened to the Thousands who Happily Set Sail for North Korea?
Gazing down from the deck of the ship for a picture, some can be seen ...
“Secondary school textbooks issued under the Kim Jong-un regime” The list of textbooks and details.
※ The material is in Korean and Japanese only. There is no English ver...
＜N.Korea photo report＞A Look at North Korea's Impoverished Rural Women (2) "Life is like being a cow on a farm" (Photo 5)
◆Stuck on a farm for a lifetime In North Korea, there is the word ‘non...