Sales of stimulants in North Korea probably succeeded for the following three reasons:

(1) The Profits are Large, and There is Demand:
Our reporter Gu Gwang-ho's investigations show that as of September 2011, eoleum was being traded in Hamhung for 12 U.S dollars a gramme (rates at the time), and in Pyongyang for around 20 U.S dollars. In Korean won equivalents, profits came to around of 22,000 won per gramme. When you consider the fact that a kilogramme (2.2 lb) of rice at the time was around 2500 won, one can say eoleum was an extremely profitable product. And in June of the same year, in Hoeryong City, a gramme of eoleum was being traded for 100 Chinese yuan (which is about 15 U.S dollars at the rates at the time). 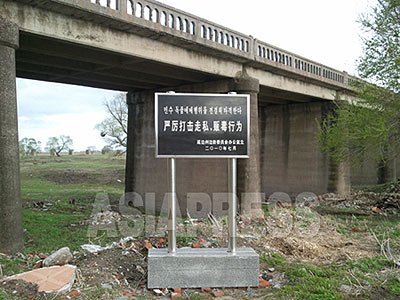 There are signboards here and there in the border area between China and North Korea, saying, "There will be tough crackdowns on drug smuggling". (May 2011, Yanbian Korean Autonomous Prefecture/China) ASIAPRESS

One gramme normally allows a user to inhale about ten times. Choi Gyong-ok (assumed name) who lives in Hyesan City in Ryanggang Province is a partnert in our reporting and information gathering. We asked him to look into this, and he came back with the information that in December of the same year in Hyesan City the price of eoleum had gone up to 150 Chinese yuan (about 23 U.S dollars) a gramme.

Choi explained the background to the price hike as follows.
"The raw material Phenylacetic acid is harder to obtain, and there are frequent crackdowns, which has had an impact. But the biggest reason is the increase in demand. People are using eoleum without giving it much thought."

Choi also had this to say about the true situation of eoleum circulating.
"In Hyesan City, selling takes place mainly in homes with links to senior members (of the party or the military). These senior executives procure from Hamhung themselves, and make the dealers sell on their behalf. In the case of rich merchants, in the interests of safety, they entrust the eoleum to the homes of People's Unit leaders that they trust, and every time an order comes in, they sell. In return, the People's Unit leaders are given around 25 to 50 kilogrammes (55 to 110 lbs) of rice a month. From what I have seen, I would say that around ten percent of the people in Hyesan City are involved in the eoleum business."

It goes without saying that the background to this is of course pressure from China and other members of the global community. Furthermore, in May 2009, North Korea went forward with its second nuclear test, leading to the United Nations Security Council passing Resolution 1874, placing sanctions on the trading of weapons and luxury goods, leading to surveillance of weapons exports. (NOTE 2)

These probably also had an adverse impact on illegal exports of narcotics.

Moreover, the United States has been holdi ng raids and searches of ships as its own unique sanctions and many other countries in agreement have been following suit, making it difficult to smuggle by hiding illicit goods in cargo. This has led to an excess of stimulants that could not be sold abroad, making it necessary for illicit sales organizations to find sales routes domestically.

(3) Domestic Crackdowns are Lax:
Selling eoleum is a "low risk" business, which is another factor in making stimulant use rampant.

"We do hear about dealers and users getting caught, but people with money will give bribes to the police, so after a month or so, they will be freed from the detention facilities without being charged for any crimes. In Pyongyang too, from December 2010 for about a month there were concentrated crackdowns on eoleum, and many people were arrested. But after a while, the illicit dealing began again just like before. Even the crackdowns on eoleum have become a tool for police to make money." (Reporter Gu Gwang-ho)

Of course, the North Korean government is not allowing domestic distribution of stimulants to go uncontrolled. In August 2003, the government enacted laws related to cracking down on narcotics, so it has shown its stance of taking severe steps. Lee San-bong has witnessed public executions of drug dealers in Hoeryong City in August 2005.

TO BE CONTINUED IN PART 5>>

NOTE 2: The Stockholm International Peace Research Institute in Sweden, well-versed in the world's weapons transactions, estimates that North Korea has lost 90% of its income from weapons trading.