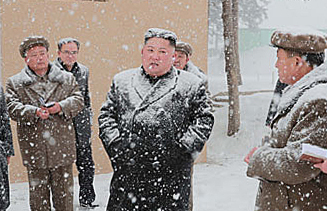 Kim Jong-un inspects construction of his project in Samjiyon. Photograph originally published in November, 2018 by the Rodong Sinmun

For the majority of North Koreans, the New Year kicks off with a tedious task, they are faced with the challenge of memorizing Kim Jong-un’s annual “New Year’s Day” speech.

For the first time since he took power, however, Kim Jong-un did not give his annual speech. Feeling a mixture of surprise and relief, residents are not yet sure what to make of the unusual situation, said a reporting partner living in Ryanggang Province on January 3.

The annual “New Year’s Day address” is generally a self-congratulatory message that recounts the nation’s achievements over the previous year and presents policies and prospects for the year ahead. During the Kim Jong-il era, this message was delivered as a “public editorial” and published in major newspapers and party newsletters. Kim Jong-un, on the other hand, has preferred to give a speech each year.

Previously, following delivery of Kim Jong-un’s annual address, North Korean workplaces, schools and public institutions would hold lectures where citizens would be forced to memorize the entirety of the speech.

These lectures would usually continue until mid-January, with groups competing in recitation contests and question-and-answer sessions. Residents dared not neglect the competition and would diligently memorize Kim Jong-un’s ambitious goals for the year.

The reporting partner summarized the local reaction to the skipped speech thusly, “We were all relieved that there would be no recitation contest. But the economy is so bad that it seems there can’t even be a New Year’s Day address- there are no countermeasures or policies coming from above. Over the past year, it was so hard to make money at the markets due to the effects of the sanctions. We therefore expected new policies or countermeasures to be brought up [in the New Year’s Day address] but there are no prospects for us. There is nothing but empty shouts of ‘self-reliance’.”
Next page :Country not on high alert for war...