Widespread use of drugs in North Korea is related to the production and illicit trade of opium, promoted by the government in the 1980's. General Secretary Kim Jong-il (at the time) led the way in starting the Paektoraji Project(백 도라지 사업), or White Bellflower Project. This was a project to produce opium from opium poppies domestically, and illicitly sell it abroad to win foreign currency. 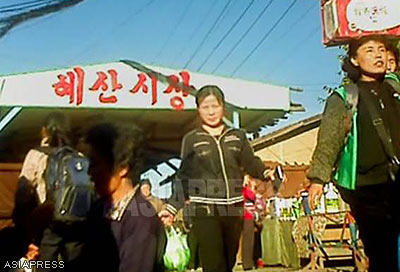 Ryanggang Province, busy with people. This is the "Hyesan Market" in Hyesan City. (November 2012 Taken by Rimjin-gang's reporting partner in North Korea) ASIAPRESS

Opium was taken out of the country by members of the army, the State Security Department (intelligence agency), the Department of Public Security, what is now the Ministry of People's Security (the police), trading companies under the control of the Korean Workers' Party and other organizations, or by diplomats, and sold. During this process, these people personally started to use the drugs. That seems to have been the beginning of drug consumption in North Korea.

But as diplomats used their diplomatic privileges to bring opium processed into the form of heroine into Europe, they were detected one after another. The investigation revealed the state-level drug smuggling and selling system, the Paektoraji Project. Exposed to global criticism, in the latter half of the 1990's, opium gradually disappeared. 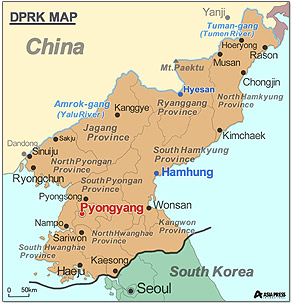 The production and smuggling ofeoleum, which appeared on the scene replacing opium, seems to be backed by the North Korean government's intention to get hold of foreign currency. Opium requires large poppy fields, but stimulants are different --- as long as you have the raw materials, production is not that difficult.

So says North Korean defector Lee San-bong, well versed in the situation back in those days, looking back.

Stimulants produced at these "secret factories" gradually started to circulate within North Korea. Rimjin-gang reporter Gu Gwang-ho explains the setup in this way.

"It's said at the beginning, only a very small number of chemists at the Hamhung factories knew how to refine eoleum since it was a state secret. But these chemists started illegal production and distribution in private. Production was originally only in Hamhung, but this spread to Sunchon, Pyongsong, and areas along the border with China in the north. It's said today, even ordinary individuals are producing in remote areas far away from human habitation, and selling in secret."

Currently, stimulants are being distributed in large volume in Pyongyang, Chongjin, and other large cities, and Hyesan City, Hoeryong City, Sinuiju City and other cities along the b order with China. Large cities have large populations, hence large markets for stimulants. They also have trading companies that travel to and from abroad. And the border cities have been strong points for smuggling into China for quite a long time.

Lee San-bong says eoleum started to appear in North Korea from around the mid-1990's, from around the time of the "March of Tribulation". The stress of living from hand to mouth, the social atmosphere where the future still remains unclear, these might be driving residents to use stimulants as a hedonistic way of escaping reality.

Another reason for the rapid spread of use might be the low awareness among residents of the risks of using stimulants, and the low sense of guilt. The mistaken understanding thateoleum is a panacea that makes you feel cheerful, and gives you energy even if you cannot eat meals led to a further increase in addicts.

TO BE CONTINUED IN PART 4>>