The Daily Life of North Koreans

For the North Korean people, winter is the hardest season. Not only because it is glacial and long, but also because many people are faced with a lack of fuel for the basic needs of cooking and heating. Some North Koreans are able to use propane gas for fuel, but this is mostly restricted to the privileged and to foreigners living in the major cities, especially Pyongyang. The vast majority of people are using coal bricks and firewood to cook their food and heat their homes. These pictures depict the dire conditions experienced by most ordinary people in their struggle to acquire fuel. Pictures were taken by our reporting partner in South Pyongan Province, in March 2013. 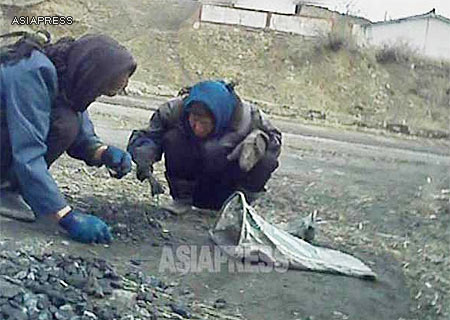 In the picture above, two women can be seen squatting on the side of the road, salvaging what coal they can. This is a road where trucks for the transportation of coal to China pass along. On this road, coal dropped by trucks can sometimes be found. People come here to collect the coal nuggets. When our reporting partner approached and asked about what they were doing, one of the woman explained, 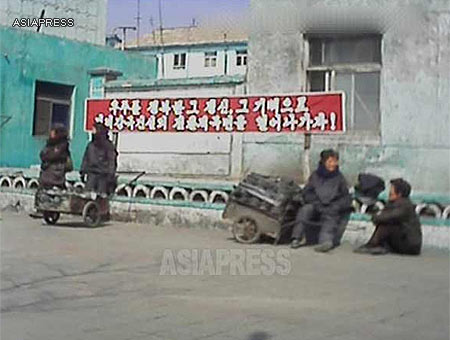 Women selling coal briquettes piled up on a handcart. In North Korea, these coal briquettes are called kumongtan, meaning 'coal with holes'. A red slogan-board behind them reads "Open up a turning phase for the strong and prosperous State with the spirit and mettle that conquered the universe!" (Pyongsong, South Pyongan Province, March 2013) ASIAPRESS

In North Korea, It is not uncommon to see people selling coal briquettes on the streets. Those with higher incomes buy those briquettes, while poorer people will usually make their own. 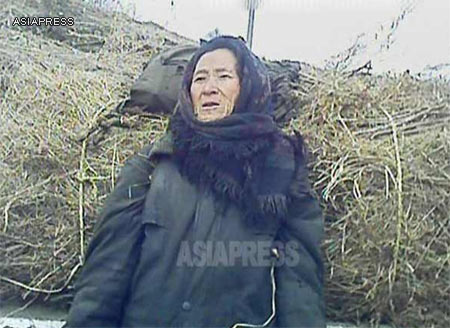 An old woman with a load of straw on her back. (South Pyongan Province, March 2013)ASIAPRESS

Our reporting partner saw an old woman slogging a load of dried grass down the road. The woman told our partner that she collected the dried-grass in the mountain because she had nothing to burn at home.

"It is not a mountain anymore. I would say it is a 'steep field' because there are no trees left on the surface. It's very hard now to get firewood there because the forest surveillance officer (the mountain ranger) keeps a close check on people's illegal grass collecting," she added.

When I was living in North Korea, in the areas around where people live I was not able to see trees or tall-grass because people cut it all down to use for firewood. In the winter season, it is not unusual to see people roaming the mountains and fields humping huge loads of wood and dried-grass.
*** Rimjin-gang