Dozens of Police officers were executed, charged with "robbery of the people's properties".

The purge of Jang Song-taek has ended with his execution by firing squad. ASIAPRESS North Korea Reporting team received information by our reporting partner in North Korea that dozens of safety officers (police) were executed at the end of November, just prior to Jang's arrest. It is assumed that this was a proactive step in the series of purge related to Jang Song-taek. The following information was obtained by telephone interview recorded on 5 December.

- Are there any changes or moves related to the purge of Jang Song-taek?

A reporting partner in North Korea(Partner):
I don't know how far it is related to the timing of the incident, but there was an execution by firing squad of safety officers (police) following the national meeting of police station chiefs that took place on 23 November. 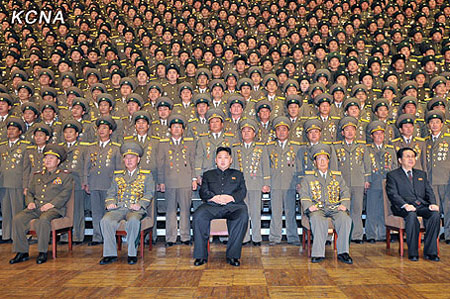 The national meeting of police station chiefs held in Pyongyang on 23 November. Kim Jong-un(Center) and Jang Song-taek(Rightmost).It is said that the execution of police officers took place after this meeting.(Nov/2013 - PHOTO:KCNA)

- Was that a public execution by the firing squad? If so, under what charges?

Partner: The execution was not in public. It was in the presence of police officers at the political university in Pyongyang (the police academy belongs to the People's Security Department.) One or two officers summoned from each province were executed by firing squad after being charged with "robbery of the people's properties".

- When exactly the execution took place?

Partner: It was after the national meeting of police station chiefs at the end of November.

- How many were executed in total?

Partner: According to a middle-ranking official of the People's Security Department in the county where I live, 35 officers were charged with the crime. Among them, some 10 - 20 officers were executed, and the rest were not killed.

- Have you heard about the story from the ranked official of the police?

Partner: Yes. He attended the station chief meeting. He told me that he also received unreasonable criticism at the meeting. There were large-scale moves after the meeting in the name of "removing the police officers who inflict harm on the people's lives and rob the properties of the people."

Those who watched the 'impure recording materials' should surrender voluntary

In a telephone interview, a reporting partner further described the recent movements of the People's Unit. The People's Unit is the neighborhood organization composed of local residents, block by block. It functions as the lowest administrative unit.

- Were there any significant ann ouncements issued for the People's Unit in your region in relation to the purge of Jang Song-taek?

Partner: In the area I live, a special instructor visited us with the two documents issued by the State Security Department (the secret police), and gave us a lecture. The instructor came in uniform and his lecture was about USB memory files and 'impure recorded materials'.

- What was said about the 'impure recorded materials'?

Partner: Anybody who watches the impure recording materials (mainly this refers to movies from South Korea) should voluntarily surrender by the end of December. As far as I have heard from several people in different places, at People's Unit and Work Unit (residential administrative unit in farming villages), there was a lecture calling on people to confess and surrender those who watched the 'wrong materials'.

Given the fact that the executions of police officers took place just before Jang Song-taek's purge and the special announcement at the lectures afterwards, these events are deemed to be affiliated to the liquidation.

It was predicted that the series of liquidations would send a ripple through North Korean society. What is now sure is that Kim Jong-un seeks to impose a reign of terror and it will be much harsher than his father Kim Jong-il.
### Rimjin-gang ------