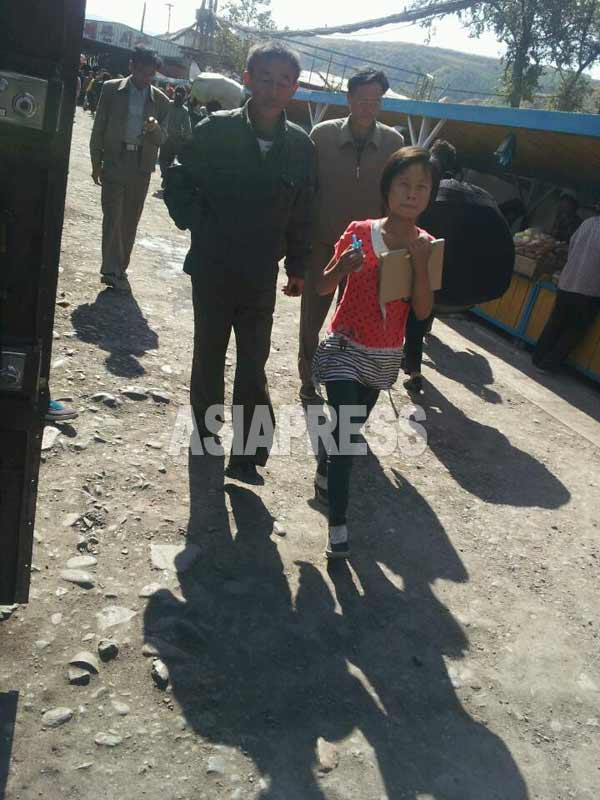 The usual view of a street in front of Hyesan Market, which was recently shut down due to the lockdown. Photographed by ASIAPRESS in September 2014.

An outbreak of coronavirus is suspected in Hyesan, the central city of Ryanggang Province in the north, and the entire city has been placed in lockdown since November 2. There is friction between authorities and residents, who are struggling to obtain food due to restrictions and there have also been reports of starvation. (Kang Ji-won/ISHIMARU Jiro)

According to accounts from multiple reporting partners living in Hyesan City, the reason for the lockdown was the authorities’ fear of a coronavirus outbreak due to recent smuggling between China.

Daily NK, a South Korean media outlet specializing in North Korea, reported that the lockdown was ordered after authorities uncovered smuggling among border guards. In addition, RFA (Radio Free Asia) reported that the lockdown came after the discovery of large-scale gold smuggling. In Hyesan, which is completely locked down, residents were banned from going out and the market was closed.

A reporting partner in Hyesan said on November 19, “I can’t even go next door. Apart from the cars of the secret police and police, the streets are totally empty- not a single ant is wandering about. No one goes to work and nobody is being mobilized.”

The blockade has seriously affected the lives of residents. First of all, the market was closed, making it impossible to buy food. The authorities said that inminban leaders and administrative staff, called “volunteers,” could go to each household to check whether there were any coronavirus symptoms and to purchase rice on their behalf.

Another reporting partner in Hyesan City said the following about the situation under the lockdown.

“The volunteers deliver 10 to 20 kg of Chinese rice to each house, but it’s not enough. It can be purchased at around 3,000 won per kilogram, which is slightly cheaper than the market price. People who don't have money though are starving, and they are protesting fiercely because they can’t even leave their houses.”

According to reporting partners, people who do not have cash cannot sell their household items for food because they are not allowed out. Those who do manage to leave their house and try to make their way to nearby farmlands to scour the ground for fallen grain, however, face the obstacle of being stopped at checkpoints.

In addition, it is said that residents are having to use chamber pots in their homes, which they may later empty in communal public toilets according to shifts.
NextPage: ◆ You cannot leave your home...