2015/December/11
Edit by PAEK Chang-ryong, defector reporter, Rimjin-gang
<This article first appeared in the Korean and Japanese edition of Rimjin-gang on September 2015>

Musan mine located in North Hamkyung Province is the largest mine in North Korea. It has been in full-operation in order to export the iron ore to China, the largest resource consuming country. The amount of exported iron ore is presumed to be U$330,000,000 last year.

The mine, as a state-managed enterprise which currently receives the state-level investments, is one of the major sources for earning the foreign currency for North Korea. 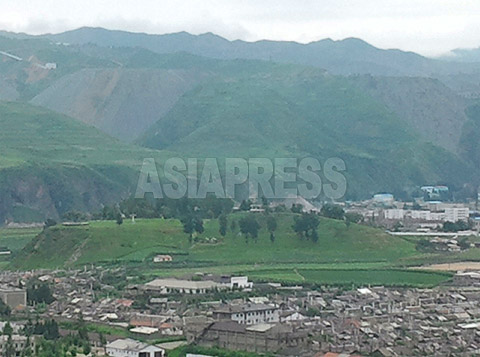 Musan mine was used to be called as the largest open-pit iron ole mining in Asia. Kim Il-sung has expressed this North Korea's largest mine as "Musan mine is the eldest son of our country". (Photo taken in August.2013 from Chinese side of the border) ASIAPRESS

At the end of August, one of our North Korean reporting partners in Musan County told us that embezzling and selling the fuel for the mine equipment to transport and excavate in the black market is rampant these days. 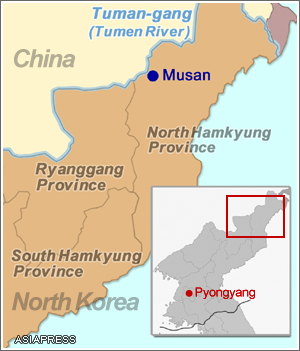 Following is the phone conversation between our defector reporter Paek Chang-ryong and reporting partner in Musan.

Paek: How is the price of the fuel in your region?

Paek: According to the information from various sources, the price of 1 liter diesel is around 8,000 to 9,000 NK won in other regions.

Partner: The state provides the priority fuel for vehicles in Musan mine. When there is enough fuel supply, the price in the market declines, and the opposite when supply is short. There are groups of people coming from provinces of Ryanggang, South Hanmyung, and Chongjin city of North Hamkyung to Musan County to buy the fuel and bring it back to their regions. 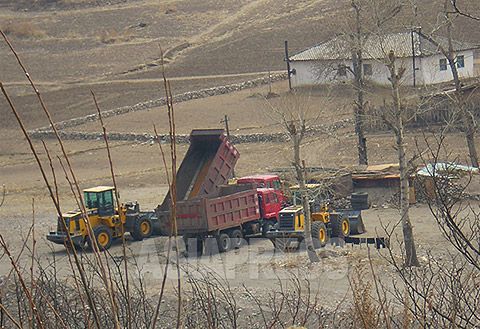 Many big dump trucks and machines can be seen in Musan County. The state-run mine is managed to stay since it earns the foreign currency by exporting the iron ore to China. (Photo taken in April.2009 from Chinese side of the border) ASIAPRESS

Paek: Does it mean that when the fuel is delivered to the mine, some individuals embezzle it and sell it to the market?

Partner: Yeah, that's right. People who work in the mine always puts a kind of special made container on their waist which fills 4 to 5 kilogram of fuel at one time whenever they find the chance to steal. Another method is to get oil from fuel tank of 45 ton dump trucks used in the mine secretly at night by bribing drivers with money. They use plastic bags in their back packs to fill the oil.

Partner: Right. But police officers also know this and they get bribes too. It won't be such a serious problem, if only dealing with the embezzled fuels. 4 to 5 persons make a team for this illegal transaction. They buy the stolen fuel from the individuals, and bring it to different locations such as Chongjin and Hyesan. They sell it in a barrel.

Paek: Is this such a large scale business?

Partner: Yes. In the house of people who engages in this business, for example, they have special place to keep tons of diesel fuel.

Facebook Twitter はてブ Pocket Feedly
RECOMMENDATIONS
＜PHOTO REPORT＞Sino - N.Korea Border ［PART2］China Frustrated With Drug Smuggling From N.Korea
2014/June/12 Report/Photo:KANG Ji-won Edit: PAEK Chang-ryong (Both mem...
＜Inside N. Korea＞ COVID-19 Countermeasures Ban Soldiers from Leaving Bases, Leading to Widespread Malnourishment
Since February, the Kim Jong-un regime has thoroughly isolated its mil...
＜Inside N.Korea＞ Government Evaluation of 70 Day-Battle Leads to Nervous Officials - Punishment of Poor Achievement and Secret Drinking,
The recent the Worker`s that ended May 9 caused strain and exhaustion ...
＜Inside N. Korea＞ Social Unrest and Discontent Over Lack of Special Rations as Security is Stepped Up For Kim Jong-un's Birthday For the First Time
January 8 is Kim Jong-un's birthday; he was born in 1984, which means...
With time running out for the aging families of Japanese abductees, the Abe administration must lay out a roadmap for settlement talks with North Korea (ISHIMARU Jiro)
January 12 marked the 59th birthday of Keiko Arimoto (有本恵子), a Japanes...
＜Special Feature＞ Escaping N.Korea…History and Present State(2) Defectors have become a threat to the regime…Around 200 live in Japan ISHIMARU Jiro
After the start of the COVID-19 pandemic in 2020, there has been an un...