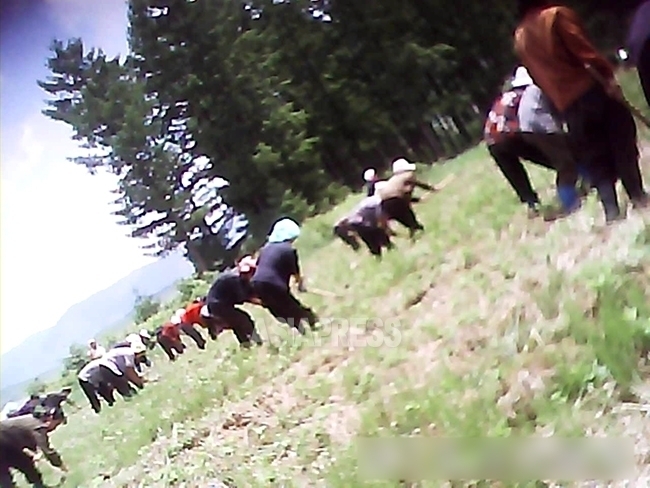 Even women living in cities are mobilized to work in the fields during the busy farming season. This photo, which was taken in June 2013, shows people weeding a farm field in the northern area of the country. (ASIAPRESS)

The Kim Jong-un regime acknowledged an outbreak of COVID-19 on May 12. The announcement came as the country was beginning efforts to plant farm fields. The outbreak of COVID-19 forced the authorities to halt mobilizations of city dwellers to farming communities. Meanwhile, North Korea’s farming regions, which had already begun to run out of food reserves in April, are facing increasing concerns about starvation. A reporting partner in the northern region of the country recently provided a report regarding life in one of the country’s collective farms. (KANG Ji-won / ISHIMARU Jiro)

The months stretching from May to July are a busy time in North Korea, with many people heading to farming areas to assist with planting and weeding. Urban residents - from laborers, students, and housewives to even government officials and party cadres - all take part in this mass mobilization of people to the country’s agricultural regions. This annual mobilization came to a screeching halt this year, however, after the government called for a ban on movement to prevent the spread of COVID-19. The Kim Jong-un regime ahd ordered a “complete mobilization” of people to farming areas under the banner of “putting agriculture first” earlier this year; however, the COVID-19 outbreak has thrown a wrench into those plans.

In early June, ASIAPRESS received a report from a reporting partner at a collective farm in North Hamgyung Province. The collective farm mainly grows corn and has around 500 farmers. The farm is on the smaller side when compared with other farms in the province. The reporting partner,“D,” has long provided ASIAPRESS with information about life on the farm. His report suggests that the situation there is very dire.

※ ASIAPRESS has been unable to obtain reports from North Korea’s “grain basket” – North and South Hwanghae provinces – making it difficult to surmise how well the farming season is going in other parts of the country.

―― What is the COVID-19 situation like at the collective farm?

D:  There have been people suffering from symptoms of COVID-19. Each work team conducts temperature checks every day, but because there’s a shortage of labor, team members who don’t have any symptoms are told to go to work even if another member of their team has come down with a fever. They are told to social distance while working. The teams no longer conduct morning roll calls.

※ A work team is the smallest group of farmers on a collective farm. The teams are made up of around 10 people.

※ In areas outside the capital of Pyongyang, there are no PCR or anti-gen tests available to confirm whether someone has been infected with COVID-19. As a result, it is difficult to know the exact coronavirus situation at the farm.

―― We’ve heard that agricultural areas have not been locked down.

D:  There are no bans on going outside, and everyone must go work in the fields. People are banned from going to urban areas. The authorities think that the spread of the virus in agricultural areas would be a big problem, so outsiders are not allowed into the areas, and farmers are not allowed out. Disease control checkpoints have been setup on roads heading out of the area and everyone is prohibited from entering except for those who have been mobilized to work on the farm.

◆ Planting comes to a standstill

―― The COVID-19 outbreak occurred during the crop planting period. How has this impacted farming activities?

D:  There is a severe lack of people working in the fields. There’s lots of “empty land” because there hasn’t been enough people to plant corn seeds. The fields are full of weeds because there’s too few people to weed them. The farm is forcing farmers to weed the fields at night. Cadres even come out at night to make sure the workers are wearing masks. The farmers are having such a difficult time that some even pretend that they have symptoms of the coronavirus just to get out of work.

―― The potato harvest is just around the corner, is it not?

D:  The potato crop this year is very bad because of the droughts. I’ve heard the yield is not even 50% of the past year. The potato crop won’t do much to help the shortage of food during the “barley hump” (the off-season before the next harvest).

※ In North Korea, potatoes are harvested in June. There wasn’t much rain in the country from April to May of this year. ASIAPRESS understands that the potato yield at another collective farm in Yanggang Province was also very poor.