A young woman sits and sells potatoes in an apartment block in central Pyongyang (ASIAPRESS).

In North Korea, the declining birth-rate is becoming a problem. In addition to the continuing trend of not having children due to prolonged economic hardship, more and more young women are avoiding marriage altogether. The authorities consider this to be a big problem and are reportedly stepping up pressure to "encourage women to contribute to the Korean revolution."

Although North Korea advocates for socialism, North Korean society has a strong tendency toward male chauvinism. We interviewed a single mother living in the northern part of the country about women "rebelling" against their country’s male-centred society. She is raising her junior high school-aged daughter on her own, following her divorce.

◆Young women are increasingly choosing not to marry

“In North Korea, men want to get married, but more and more young women want to stay unmarried somehow. The attitude toward marriage has changed drastically. As long as you have money, you can survive. Money is more important than marriage. That seems to be the watchword. Once you get married, it is difficult to divorce. Many women cannot divorce and live separately from their spouses.”

――Why do they not want to get married?
“It's because women have to bear a greater burden. Men have to go to work where they don't get paid or food rations, so women have to go out and do business to support their husbands and children. Women talk about marriage as if it is acquiring a guard dog whose only function is to stay at home. Even so, they are forced to have sex at night, so the phrase "I don't need a man anymore!" is becoming a slogan around me. The answer to the question "Why don't you get married?" is too obvious to even ask. Many unmarried women are making good money in the market, and widows who don't have to take care of their husbands are better off."
※If a man leaves his assigned workplace and engages in commercial activities, he will be punished. 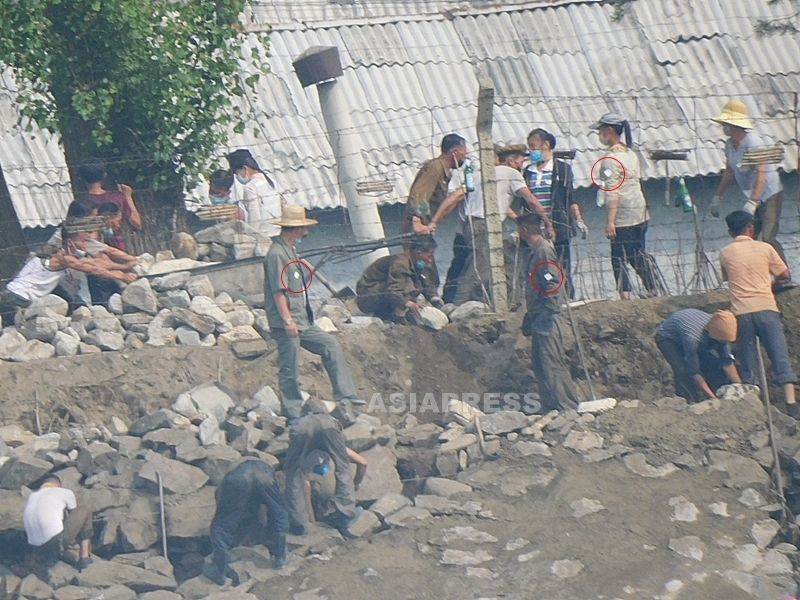 A scene from the construction of the Yalu River embankment. The people are believed to be mobilized from workplaces and women's alliances—North Pyongan Province, photographed from the Chinese side in mid-July 2021 (ASIAPRESS).

The rise of such a trend is making the authorities nervous. This is because the birth-rate is seriously declining. However, since the North Korean regime does not release any population-related statistics, the actual figures are unknown. Still, the U.S. Central Intelligence Agency (CIA) have estimated that the total fertility rate (the estimated number of children a woman will have in her lifetime) as of July this year was 1.91. Thus, the country has already become an ageing society.

The Kim Jong-un regime, through the Korean Socialist Women's League (Women's League), a women's organization under the Workers' Party, continues to apply pressure on women to marry and not to remain unmarried.

――Do the authorities intervene in the issue of marriage?
“For women over 30, they must switch from the Youth League (Socialist Patriotic Youth League) to the Women's League. The Women's League used to be an organization for married women. Now, unmarried women are coming in one after another. Since the top management instructed us to manage the unmarried women properly and make them marry, every time we had a meeting or a speech, we would say, 'We must eliminate the phenomenon of avoiding marriage so that we can fulfil our role as mothers and help the revolution by becoming the wheels of the North Korean revolution.' In addition, the chairperson of the Women's League said that 'There are many women who are blinded by the desire to make money and avoid marriage, but this is not right. This is not the right thing to do. Even if one earns money and lives a rich life alone, it does not help the country.' In short, they want us to get married and have lots of children."

――Are there any common-law marriages in North Korea?
“Yes, it is increasing. Because divorce is complicated in North Korea. Many people live for a long time without registering their marriage. However, the government criticizes cohabitation without marriage, saying that it is an 'unsocialist act.' Through the People's Units, they investigate and summon people to force them to register their marriage. It is hard when the authorities break up the cohabitation and the couple meets secretly because the authorities crack down on that too."

――The criticism that it's "unsocialistic" seems excessive.
“There are sometimes people who do not get married but only have relationships and receive support from their partners. Of course, the authorities crack down on it, saying that ‘it is an act of a concubine and therefore unsocialist. Common-law marriage is not allowed.’ But what are they going to do about the young women who still don't want to get married?"
(end)