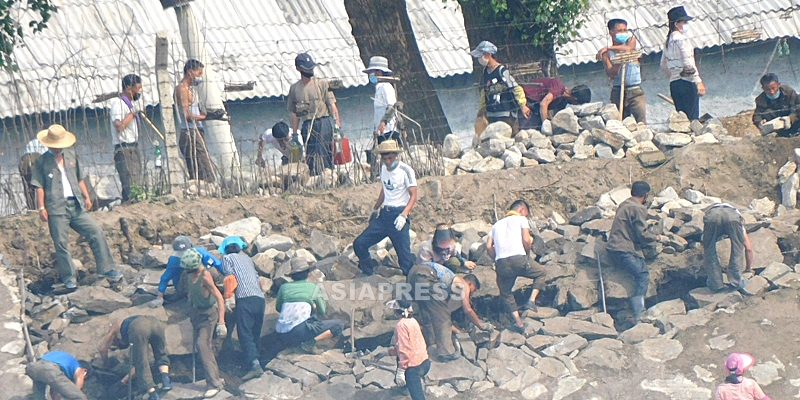 (Photo) The manual construction of the dam atof the Yalu River, a river bordering China in the morning, is done manually. RHowever, residents seem to have been mobilized from workplaces and women's organizations. Photographed from the Chinese side in mid-July 2021 (ASIAPRESS).

A year and a half has passed since the COVID-19 pandemic began. People across the world have had their jobs and livelihoods impacted, and vulnerable groups have found themselves in dire straits. In North Korea, the prolonged national isolation and conditions brought on by the pandemic have deeply affected the lives of ordinary people. This can be seen, for example, in the country’s rising divorce rate. Frustrated with their lives, North Korean women are leaving their homes or demanding divorce in increasing numbers. To find out more about this phenomenon, ASIAPRESS interviewed a recently-divorced single mother living in the northern part of the country.

“Recently, there has been an enormous increase in the number of women leaving their husbands by running away or seeking divorce. The main reason is that life has become difficult due to coronavirus. Men are required to work unconditionally at workplaces located in the countryside, but they are not provided with a salary or food rations because production has almost stopped. Instead, the workplaces demand that the workers provide the business with cash, firewood, gasoline and other materials.

Wives have to prepare these resources by desperately earning money through independent business while also feeding their families. If a man is absent without notice, he will be criticized and can be sent to a "Labor Training Unit". Since coronavirus, the measures became strict and unforgiving. Even so, many men drink and don't do housework or help raise children. That's why wives hate being with them.”

※ In North Korea, it is mandatory to participate in "organized life" in the workplace for “learning” and mobilization. A "Labour Training Unit" is a short-term forced labour camp where people are detained for violating the social order.

――Men are also in a difficult position, are they not?

“At home, they are blamed by their wives for not earning enough money, and at work, they have to work like servants- as ordered by their bosses. Many men get so stressed out that they drink and beat their wives. Even in the apartment where I live, I often hear couples fighting.”

――I've heard that it is not easy to get divorced in North Korea.

“The government doesn't easily grant divorces, and these days it takes about a year because there are so many people who want to get divorced. Also, women have to bribe officials to make it go faster. It can be said that the court officials are living off the bribes they receive from women seeking divorce. Even if a woman runs away from home and returns to her parent's house, she cannot stay there for long because she is not registered as a resident and will be subject to police control, so she has to return. Therefore, it is a long and hard process for women to be granted a divorce.”

“No, most of them don't approve it because if their wives leave them, they can't live by themselves. In many cases, they don't give up their children as a condition of accepting the divorce and they also demand money under the pretext of child support.”

The Kim Jong-un regime has tightened social controls, such as restricting the commercial activities and movement of individuals under the auspices of coronavirus quarantine measures, and many ordinary people are suffering from poverty due to reduced cash income. Although North Korea still has a strong male-dominated culture, the increase in divorces is a "revolt" against the male-dominated society by women who have been forced to sacrifice for a long time.