In North Korea cows are indispensable for agricultural tasks and ordinary people have never tasted beef.
Oxcarts can be seen everywhere in North Korea. It is one of the most important means of transportation in the country, next to bicycles. Trucks and cars, as a form of private transport, are not common for the majority of people, and trains are unreliable, services often delayed or suspended due to electricity shortages, especially in the countryside. 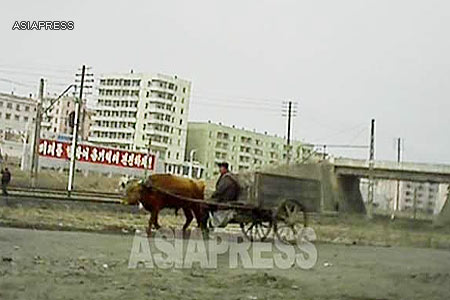 An oxcart at the roadside. Behind the ox, the slogan reading "Forward toward the future with full of courage" can be seen. (Taken by our reporting partner in South Pyongan Province, March 2013.) ASIAPRESS

Interestingly, the state does not allow oxcarts to be privately owned. Every oxcart belongs to the "Oxcart establishment office" located in each city and county. In North Korea, oxcarts are not only used for transporting heavy loads, but also for carrying out agricultural projects. These beasts of burden are vital instruments in the farming collective, where tractors often run out of gas because of the fuel shortage. For these reasons, oxcarts are managed and supervised by the state, and individuals are not permitted to sell, trade and dispose of them.

However, this does not mean that any "special treatment" is given to cows. It is well known that in the North there are many people suffering from malnutrition and there is no special food rations allocated for the animals.

In North Korea, it is strictly prohibited to capture and slaughter these animals. It is a common understanding in North Korea that the illegal slaughtering of a cow is likely to bring upon the guilty party the death penalty. If such strict measures were not taken by the state, cows would most likely have entirely disappeared during the mid-1990s, when mass starvation gripped most of the country. 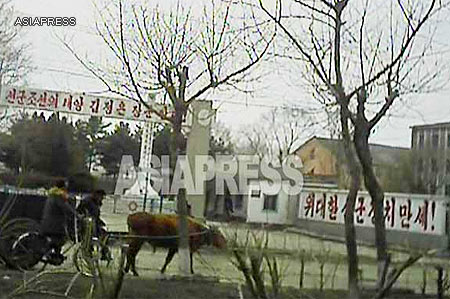 An oxcart passes in front of what is presumed to be a state facility. The slogan on the left reads "Long live the General Kim Jong-un, the sun of the Military First Korea!" On the right "Long live the great Military First Policy". (Taken by our reporting partner in South Pyongan Province, March 2013.) ASIAPRESS

Pork and chicken can be seen in the ordinary marketplace, but not beef. It is because the authorities strictly control the trade and circulation of this animal. Beef circulates among the elite class of households belonging to Workers' Party officials, ranking officers in the military; it is also available to foreigners. For the majority of people, beef and even beef-bones are conside red a very precious product. Broth soup decocted from beef bones is treated as a "nutritional supplement".

Exceptions to this are when cows die of old age or in accidents. These become "authorized beef", declared officially consumable by a veterinarian or a 'slaughtering supervisor'. In these cases it is often proposed that the meat be delivered to a 'Goodwill home' or orphanage as a gift. However, in reality, a considerable amount of beef is embezzled during the course of transportation ending up on the black market. 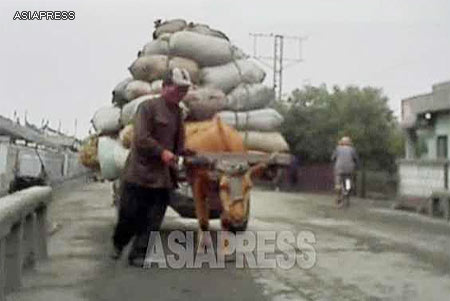 Only a select few in North Korea can experience having this near-sacred animal on their plate, for ordinary North Koreans it is inconceivable. When I lived in North Korea, I had a unique opportunity to eat beef. I found it to be a tough meat, even after it was cooked. After I defected the country, I realized that the beef I had tasted in North Korea was far different from that which people enjoy in foreign countries.
*** Rimjin-gang