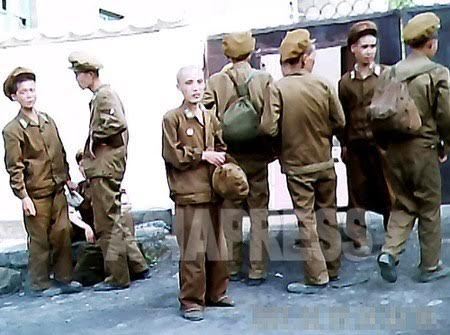 Military engineers being transferred to a hospital due to malnutrition. July 2011, in South Pyongan Province. Taken by Kim Dong-cheol(ASIAPRESS)

Since February, the Kim Jong-un regime has thoroughly isolated its military personnel from the public in order to prevent spreading the coronavirus. According to various reporting partners living in the northern part of the country, there are still few soldiers on the streets. Of the few soldiers that are seen, most are said to be military police on patrol. Meanwhile, those in lockdown on the bases are said to be in deteriorating conditions and facing major nutritional deficiencies. (Kang Ji-won/ISHIMARU Jiro)

How has the coronavirus been affecting the People’s Army? ASIAPRESS launched an investigation into the issue in May.

A reporting partner told ASIAPRESS on May 13, “Currently, the only group of soldiers seen off-base is the unit working on the military’s paddy fields. They do not go back and forth from the base though. Rather, they set up tents next to the fields. Normally, soldiers would be supporting the cooperative farms at this time of year, but no soldiers have been mobilized to do so this year.”

◆ Nutritional deficiencies due to lockdown

It is common knowledge that the diet of North Korean soldiers is very poor. This is because the government cannot secure enough food to feed 1 million soldiers and because food supplies are often stolen from the military.

Malnutrition is especially common during the so-called “barley hump,” the period from April to late June, when grain supplies from the previous harvest run out before new grain is ready to be harvested. Particularly in the last 5-6 years, well-off families have found ways to pay for their sons in the military to be fed better. The method by which they do this is by leaving cash at a private house close to their son’s military base. Stopping by the house, the soldier will be treated to bread, tofu, and other snacks. Particularly well-off families can even pay to leave a mobile phone to be used by their son at the house. In addition, families can also bribe officers directly to ensure their son is provided with nutritious food from the officer’s home.

With soldiers banned from leaving their bases, however, it has become very difficult for soldiers to access these usual supplements to their diet. As the reporting partner explained, malnutrition has become widespread in the military.

“When I asked those with children assigned to units in Gangwon and Hwanghae Province, they said that their children have not been allowed to leave the base. Some parents are worried because they have not been able to reach their children at all since March. Another concern is that, with their income cut due to the coronavirus, they no longer can make enough money to send remittances to their children. The local residents near the bases are said to be asking for twice the amount of money they would normally charge for delivering remittances and food to soldiers visiting their houses. It is also said that, recently, officers must be given additional bribes to grant soldiers extra food supplies.”
Next page :■ Malnourished soldiers on the rise...