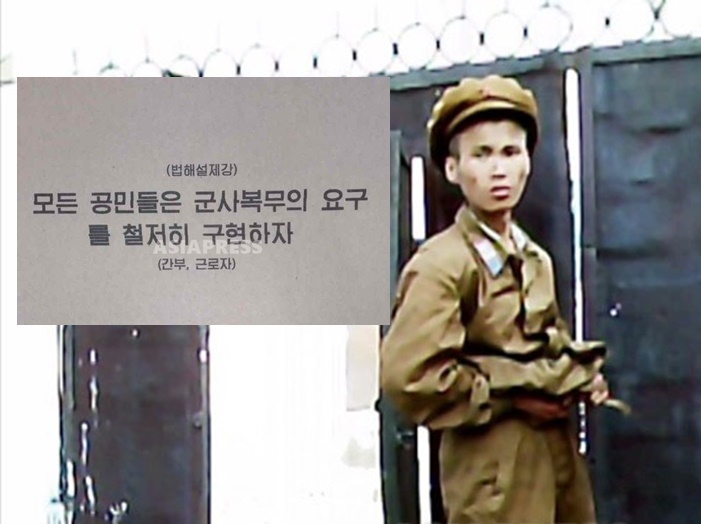 On the left is the cover page of the internally-disseminated document. “All Citizens Must Fulfill the Demands of Military Service.” On the right is a malnourished soldier sent to hospital. Photographed in July 2011 in South Pyongan Province by ASIAPRESS

Through a reporting partner in North Korea, ASIAPRESS recently acquired a document internally-disseminated by the Workers’ Party in March 2020.

The five-paged document is a political ideology textbook aimed at officials and is entitled “All Citizens Must Fulfill the Demands of Military Service.”

According to a North Korean defector with experience in the military, “The fact that such documents are being produced shows that there are cases of people ignoring or violating the Military Service Act.”

The purpose of the document is to reinforce the public’s knowledge of the Military Service Act which was enacted by the 10th Standing Committee of the Supreme People's Assembly held in December 2003.

Under the law, North Korea created a “national military service system,” which would obligate the entire nation to perform military service in either the regular or reserve forces or the civilian armed forces.

According to the 2019 Defense White Paper, the North Korean People’s Army is composed of about 1.1 million troops. (However, some researchers estimate this number to be closer to 700,000.) These estimates equate to roughly 4.5-5% of the total North Korean population. In addition, it is known that there are 4.7 million reserve force members and 3.5 million members of the civilian armed forces. Based on these figures from 2018, this would push the estimated total up to 62.5 million.

Maintenance of this massive armed force is very important for the Kim Jong-un regime as the Korean People’s Army is one of the key elements of the North Korean system.

As of 2020, the mandatory military service for North Korean men is 13 years, while for women it is 8 years. Certainly, young North Korean people must endure a harsh youth.

The most recently obtained document cites Kim Jong-il, explaining the importance of national defense and military service. It also includes details of the Military Service Act, as it was enacted back in 2003. The details of this law were initially not released to the public and so are not yet well-studied by scholars in South Korea.

The obtained document is not labeled with any warnings such as “confidential,” “secret,” or “top secret.” In fact, there are even several typos among the text. According to a North Korean defector who previously worked for a state agency, internal documents such as these “sometimes contain spelling errors.” The defector also explained that documents such as this one “would be used for educational purposes for members of the Workers’ Party and for members of workplaces responsible for propaganda.”

◆ Mandatory role for men and support role for women

〈...Citizens shall register their military service in time and endeavor to meet the conditions of enlistment. Articles 3 through 9 of the Military Service Act regulates the following:〉

Next Page： ◆ Enlistment following graduation
1 2
Facebook Twitter はてブ Pocket Feedly
RECOMMENDATIONS
＜Latest Report on N.Korea＞Another year of emaciated soldiers in N.Korea; Young Soldiers suffering with Malnutrition (Four Photos)
In late July, a reporter for ASIAPRESS was on a cruise ship on the Ya...
＜Interview with N. Korean Residents (Part 2)＞ “The South did nothing for us”: North Koreans Blame Defectors and Moon for Destruction of Border Liaison Office
With the Kim Jong-un regime deciding to destroy the joint liaison offi...
＜Inside N. Korea＞ The Deteriorating Plight of the People (2) Kim Regime Prioritizes Order Over Welfare [ISHIMARU Jiro]
Related Articlefa-arrow-circle-right＜Inside N. Korea＞ The Deteriorati...
＜Inside N. Korea＞Trade with China Set to Resume in March with Fertilizer Imports as Top Priority
North Korea has begun to work toward the resumption of trade with Chin...
The Purge of Jang Song-taek - "Self-Criticism" Campaign Launched
2013/December/11 Written by PAEK Chang-ryong, a defector reporter. Rec...
Interview with a Trader from Pyongyang (PART1)
(Interviewed by ISHIMARU Jiro, editor in chief - Rimjin-gang)2015/Febr...