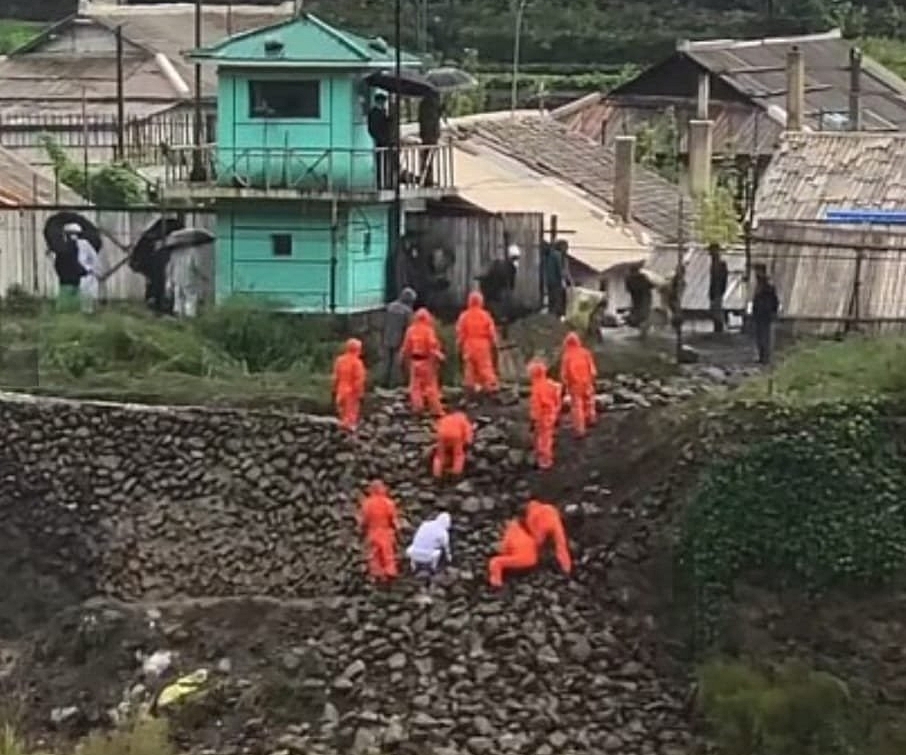 An example of North Korea’s overreaching efforts to prevent the spread of COVID-19. People are seen wearing protective gear while working to repair a levy at the banks of the Yalu River, which flows between China and North Korea. Taken by ASIAPRESS on the Chinese side of the border in October 2020.

Several cities along the North Korea-China border recently vaccinated their populations against COVID-19 using Chinese vaccines, ASIAPRESS has learned. Following the start of the COVID-19 pandemic in January 2020, North Korea shut its borders with China and implemented strong restrictions on trade. On the back of the recent vaccination campaign, however, there are rising hopes in the country for the restart of trade. The following report is based on information obtained from ASIAPRESS reporting partners in two areas of North Korea. (KANG Ji-won / ISHIMARU Jiro)

Reporting partner “A,” a laborer at a state-run company and a member of the Workers’ Party of Korea, lives in Hoeryong, a city in North Hamgyung Province. He provided the following report in early November.

―― When did the vaccinations begin?

A: Vaccinations were conducted in Hoeryong starting in early October and lasted until October 20. The authorities said that the vaccinations were “vaccines to prevent COVID-19,” but I don’t know the name of the vaccine. After getting my vaccination, I had symptoms similar to a cold for one or two days, and was told I would suffer from ill effects if I took any fever reducers or other medicine. I also received a flu shot along with another vaccine that I was told would prevent colds.

―― Are other areas of North Korea conducting vaccinations?

A: Rason started a vaccination campaign before Hoeryong did. I asked about the situation in Chongjin and was told that there’s been no talk about vaccines there. It appears the authorities are vaccinating the population on the border with China first. I did hear, however, that Pyongyang has already completed its vaccination campaign.

※ Rason has trade routes into Russia and China. On November 2, Russian media reported that 30 horses had been exported to North Korea following the restart of train-based trade.

―― So it seems North Korean authorities have conducted a mass vaccination campaign. How did they conduct the vaccinations?

A: The vaccines were provided to people 17-years-old and older. Neighborhood watch units (inminban) confirmed the number of people (to be vaccinated) and people were then vaccinated in groups.

―― Did you suffer any ill effects after the vaccination?

A: I didn’t suffer any symptoms. I along with many other people in Hoeryong all caught COVID-19. So I’m not really sure whether getting the vaccine now will really do much. They say that the vaccinations are being administered so trade can be quickly restarted with China. People are anxiously awaiting the reopening of the border.

※ Inminban are North Korea’s lowest administrative units. They typically manage 20-30 households in a particular area. Inminban leaders relay orders from local district offices to residents and are also in charge of keeping a close eye on the (ideological) tendencies shown by ordinary people.

◆ Why are vaccinations needed now?

“B,” a reporting partner based in Yanggang Province’s Hyesan, provided the following report in early November.

―― When did the vaccination campaign begin?

B: The authorities claimed that there was no need for people to get the vaccines because everyone had gotten COVID-19, but they suddenly started administering what they called “COVID-19 prevention vaccinations” from late September. The vaccination campaign probably ended in late October. People believe that COVID-19 is like a cold, so they think the vaccines are to prevent colds, but everyone wanted to get a vaccine – nobody tried to avoid getting a jab.

―― How were the vaccinations administered?

―― Where were the vaccines from?

B: They were Chinese vaccines. I also got a flu shot, which was Chinese as well. The typhoid vaccine I got was manufactured in North Korea.

―― How did people respond to the vaccination campaign?

B: People hope that with the vaccines they’ll no longer get the flu or the coronavirus. There are rumors that the administering of the vaccines is aimed at quickly opening up the border with China. People have high hopes that trade will restart so they can get return to their business activities.

That being said, the authorities have told people to stay alert and continue wearing their masks because new variants of the coronavirus could still appear. The authorities have also told the sanitation management directors in the neighborhood watch units to check the people under their responsibility to prevent the appearance of any more COVID-19 patients.

According to Radio Free Asia (RFA) on November 1, COVID-19 vaccinations recently began in the region near China.

Above, ASIAPRESS’s two reporting partners said that they had gotten COVID-19, but it is unclear what they were infected with because PCR tests have not been administered in most areas of North Korea outside of major cities. North Koreans generally determine whether they have COVID-19 based on symptoms such as fevers or runny noses.