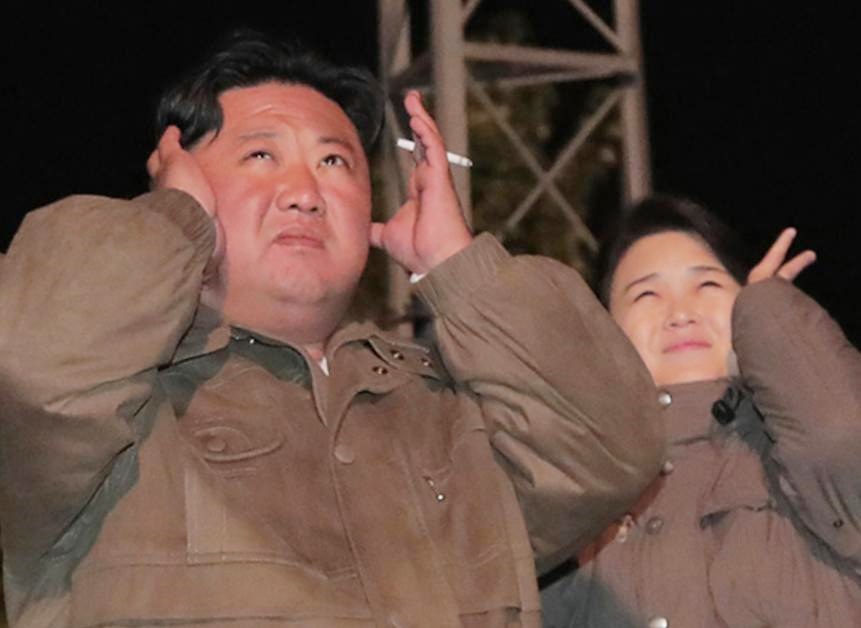 A photo showing Kim Jong-un accompanied by his wife Ri Sol-ju at a missile test launch. Taken from the October 11, 2022 edition of the Rodong Sinmun.

The impact of the COVID-19 pandemic and economic sanctions have pushed North Korea into its most severe economic crisis in decades. The Kim Jong-un regime conducted seven missile tests from September 25 to October 9, all with the knowledge of the poverty facing the large swathe of its people. How did the regime explain the missile tests to its people and how did they respond? ASIAPRESS talked to a reporting partner in the country to find out more. (KANG Ji-won)

◆ The government claims that the Supreme Leader will protect the people

“A” is a reporting partner who lives in North Hamgyung Province. He is a party member who works in an ordinary company. The remarks in parentheses are those added by ASIAPRESS’s editor.

―― Did the government make an explanation to the people about the missile tests?

A:  Yes, it did, telling us that the missiles were shot off to guard against the US raising tensions. There was a lecture held on October 8 explaining about the current state of affairs, and on October 10 (the day commemorating the foundation of the Workers’ Party), the authorities said that we have exceptional nuclear military power. The government said that while the imperialists are evil, we must trust that the Supreme Leader will never let us down.

―― Is the atmosphere there of people not knowing when war will break out?

A:  The authorities have told us to maintain a sense of tension and mobilization (for war). I don’t know why they keep emphasizing that after they’ve already said we have nuclear weapons, though.

People here aren’t interested about whether a war will break out or not. They just need to survive. After the government launched missiles, leading to talks with the US, the economy looked like it would improve, but it didn’t.

So, even if the government shoots off missiles and conducts nuclear tests, people have no interest because they know it won’t lead to them getting rice (food). The lecturers talked enthusiastically and excitedly, but people listening probably just wondered when they were going to stop talking.

A:  There’s no talk of rice coming from China or Russia, and money isn’t circulating in the markets. The US needs to remove its sanctions in order for trade to resume, but (the government) is launching missiles. Traders are fatigued. I’m also not sure where this country is heading.

They say that shooting off a nuclear weapon would lead to the end (of the country), but there’s people who don’t trust the government’s line that making threats (with weapons) will make the Americans more amiable toward talks. They don’t say that out loud, of course. They’d be arrested for spreading rumors.

Ultimately, people say that just avoiding starvation and staying alive is their form of patriotism. People need food to eat more than protecting socialism or developing nuclear weapons, but the government isn’t handing out food, so people are forced to find their own ways to survive. Everyone does a good job being self-sufficient.

Despite it being autumn, there’s a lot of people who can’t eat more than two meals a day. They can’t eat unless they earn money. They worry just about how to survive. The leadership doesn’t carry about them.

―― Was there any special rations handed out for Oct. 10 (the day commemorating the founding of the Workers’ Party)?

A:  Five days’ worth of corn per person was sold at state-run food shops. Chinese corn. There were no separate rations for family members. Special agencies (the police and other security-related agencies), party organizations, and trade companies provided cooking oil and pork to their employees, but nothing was given to ordinary people.

＜Related Article＞
Facebook Twitter はてブ Pocket Feedly
RECOMMENDATIONS
＜Inside N. Korea＞ Memory Fades: 7 years after his death, N. Korea scales back Kim Jong-il commemorations
◆ Purposely evoking the image of Kim Jong-il December 17th marked the ...
[Video Report] Fleeing back alley vendors by cracking down
Reporter, Koo Gwang-ho of ASIAPRESS, recorded a video on street vendor...
The goal of N. Korea’s missile and nuclear development is to perpetuate the rule of the Kim family…The regime is ignoring the existence of its starving population ISHIMARU Jiro
Starting in late September, North Korea fired off a succession of ball...
＜Inside N.Korea＞ The Chinese-N.Korean Border is under Strict Control
2017/Feb/16 The Chinese New Year was celebrated at the end of January...
＜N. Korean Trade Interview＞ Pyongyang Faces Great Depression as Apartment Prices Plummet and Markets Slump
Two years have passed since the international community imposed the ‘s...
S. Koreans are immensely fatigued about N. Korea…But continued interest in the N. Korean people is necessary. ISHIMARU Jiro
I have found it increasingly frustrating to report and write on North ...