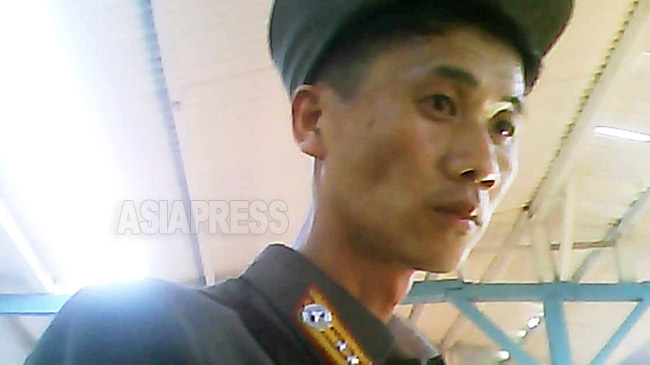 A gaunt officer is wandering around market. Taken by ASIAPRESS at Hyesan City, Yanggang Province in August 2013.

Many Japanese media in the recent month have produced the news, so called, ‘Crisis of Korean Peninsula in April’: Trump administration may preemptively strike North Korea against its nuclear and missiles, and thus North Korea may take revenge on the US by launching missiles to Japan and South Korea.

Then, how do the North Koreans think about the possibility of the war? ASIAPRESS is listening to the various voices from the reporting partners in North Korea since April. Kim Jong-un regime is also escalating the tension by performing emergency drill and warning that a war is imminent.

However, the responses of North Korea people were quite cool and indifferent.

“There shouldn’t be anyone who would believe that a war would broke out. Everyone has no interests, or fear, even if we have to join drill by forced order from the above,” told a female in northern area of North Korea through an email in the mid April. Most of the reporting partners shared almost the same opinions.

This kind of insipid response might be due to the “numbness to war.” The North Korean regime has kept the tension and burden toward its people by saying “War is imminent” after the cold war. In actuality, there have been multiple cases of volatile situations with the US. (*)

The regime initiated extensive instigation internally and externally that a war might be imminent after the first nuclear test of the Kim Jong-un regime in February 2013. It had kept its people under strain by fully mobilizing the people,like using anti aircraft drill. But the war never broke out. The people became aware of it that the regime has the aim to keep tight control over its people by arousing tension through the preparation of war. The government became the boy who cried wolf.

As the North Koreans themselves believe that their military can’t wage a full scale war, paradoxically, they feel less strain on the possibility of war. ASIAPRESS periodicallyreceives reports from the reporting partners; the first thing they mention is the worsening nutrition of the soldiers as well as the poor condition of the equipments.

“The homecomers due to malnutrition from the military are increased notably this year. Three soldiers came home nearby. One of them says that he would die at the side of his parents rather than dying by starvation. He says he can’t endure the military life any longer.” (A worker on the phone on April 19)

“The military should still use charcoal engine car due to the shortage of oil.” (Ex-soldier on the phone on April 20)

The malnutrition of the People’s Army has been gradually common from 20 years ago. The number of soldiers is around 1 million which accounts 5% of the total population. The regime can’t afford to feed that large number of soldiers due to its poor financial capacity. Furthermore, embezzlements are so widespread among the officers that the rations are in short for the lower ranks.

A self-contempt joke is popular: “They have another secret military for real war!”

Kim Jong-un regime has skillfully used the images of missile launching or valiant military parade to propagate it as a “military power.” It is needed to see the reality of the People’s Army objectively. The nuclear and missiles are intimidating though. (ISHIMARU Jiro)

*A US vessel ‘Pueblo’ was attacked and captured in January 1968, having left one dead and 82 arrested. The US sent an aircraft carrier to put pressure on North Korea for the release of its crew. But the leader, Kim Il-sung refused. The tension escalated. Eventually, the US apologized and the crew were released.

Two American soldiers were killed by North Korean soldiers while they were pruning trees at the Joint Security Area of Panmunjom in the demilitarized zone. The US Forces dispatched an aircraft carrier and cut the trees. Kim Il-sung expressed regrets, which prevented further confrontation.

The Clinton administration of the US established a limited bombing campaign on the nuclear facility in Yongbyon of North Korea in May-June 1994. Then the President of South Korea, Kim Young-sam relentlessly opposed the bombing. The bombing was halted as Kim Il-sung expressed the nuclear freeze to the Ex-American President Jimmy Carter. A kidnapping victim, Hasuike Kaoru wrote in his book ‘Kidnap and Resolution’: They had tensely lived in fear of war as the blackouts were imposed in Pyongyang at that time.