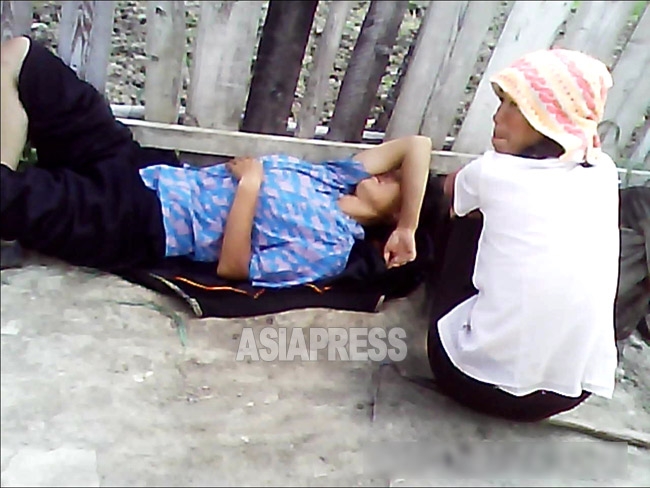 (FILE PHOTO) A woman mobilized to work on a farm lying down for some rest during her work. Taken by ASIAPRESS in the northern part of the country in June 2013.

With the start of the fall harvest in North Korea, the authorities are mobilizing city dwellers to work in collective farms in earnest. The restrictions on those mobilized this year are stricter than last year, and the food provided is insufficient, leading to discontent among the mobilized urbanites. An ASIAPRESS reporting partner in Yanggang Province gave an update about the situation on September 21. (KANG Ji-won)

The reporting partner, who lives in Hyesan – a major city in Yanggang Province – said that the authorities are mobilizing members of the urban workforce and regular people to farms in Samjiyon and Unhung counties, explaining:

“All the workers at factories and enterprises in the city have been mobilized to agricultural areas with the people’s committee (the local government) designated who goes where. This year, even Workers’ Party cadres have been ordered to participate in the mobilization without question.”

North Korea’s agricultural mobilizations occur twice a year, in spring and fall. There are two kinds of mobilizations: One where workers head to farms in the morning and come home in the evening; and another where workers live in the agricultural areas for set periods of time. Those outside of the workforce, such as housewives and university students, are mobilized by the Socialist Women’s Union of Korea and Youth League, respectively. 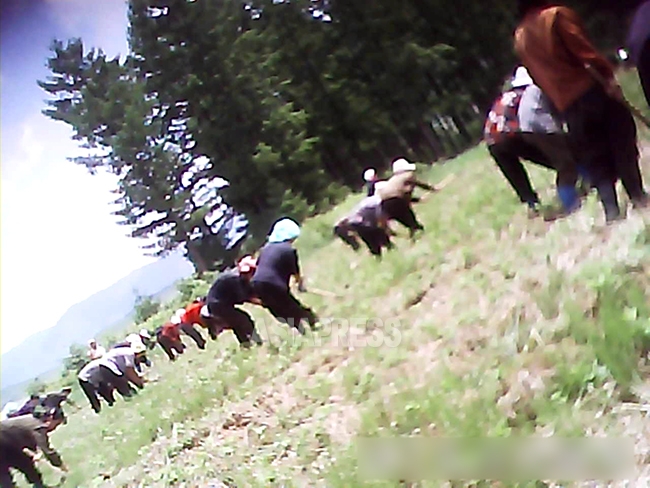 (FILE PHOTO) Women mobilized during the farming season weeding in the fields. Taken by ASIAPRESS in the northern part of the country in June 2013.

The biggest obstacle facing farming areas, however, is the robbery of harvested goods by people mobilized to work on the farms. Urbanites all face difficult economic conditions, which means that many of them turn to robbery once they arrive in farming areas.

“There was an incident in mid-September where four laborers mobilized to a farm in Samjiyon County stole some potatoes they were harvesting and went into the mountains to cook and eat them. They were caught in the act and all four were sentenced to three months of unpaid physical labor. Someone who returned from being mobilized in Samjiyon told me that last year the collective farms gave out boiled potatoes as snacks, but this year they didn’t hand out anything and just put people to work. He said it was like working in a prison. There’s a lot of discontent felt by those mobilized.”

Next Page
1 2
Facebook Twitter はてブ Pocket Feedly
RECOMMENDATIONS
＜Inside N. Korea＞ “City of Fear”: State Security Command Deployed from Capital as Economic Deterioration Gives Rise to Drug Trafficking, Prostitution, and Organized Crime
The North Korean authorities reportedly deployed the Ministry of State...
＜Inside N. Korea＞N. Korea’s largest iron mine shutdowns, markets close, and controls intensify daily due to COVID-19 in N. Hamgyong Province’s Musan County
The situation in North Korea is changing by the day as the country’s a...
＜N. Korea Pro Report (Part 1)＞ How is North Korea’s Economy Faring in the Face of the Coronavirus Pandemic and Continued Sanctions?
Due to the chaos caused by the global spread of COVID-19, the issue of...
＜Inside N. Korea＞ Hunger hits the countryside ... the rise of 'hungry households' confounds authorities
◆Agricultural producers are starving 'Hungry households' is what they ...
The lockdown in Hyesan suddenly lifted after only two days, due to strong opposition
Hyesan’s lockdown was suddenly lifted on the evening of March 4, just ...
＜Photo Report＞ People are exploited in mobilized labor (2) Recorded women’s complaining voices; “This is all free labor,” “Everything is taken by the high ranks”
The mobilized labor is performed by the unit of work place and school....