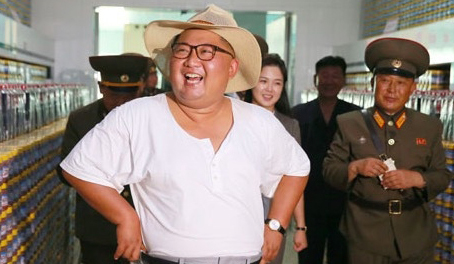 Kim Jong-un, along with a close aide and his wife, Ri Sol-ju, conducting an on-site inspection. Photograph released by the Korean Central News Agency

The North Korean authorities have reportedly mobilized a large number of senior Workers’ Party officials from Pyongyang to tour the “historic sites of the revolution” in Samjiyeon County, including Mt. Baekdu and other locations. (Kang Ji-won)

August is typically a time when leaders of organizations, businesses, schools, and military units from all over the country are mobilized to visit the historic site of Mt. Baekdu. This year, however, local residents were surprised by the sudden appearance of a large group of central party officials.

On August 9, a reporting partner living in the region told ASIAPRESS, “Their group, called the ‘Central Party Headquarters Surveying Division,’ was huge in number. About 700 in total. They walked together from Hyesan station to the field site, all wearing the uniform of the Red Guards militia, along with ‘anti-Japanese’ hats. It is common for college students, soldiers, and police to come to the site in such large numbers but very rare for that many central party officials to come. So rare, in fact, that local residents all came out to catch a glimpse.”
Next page : According to the reporting partner...