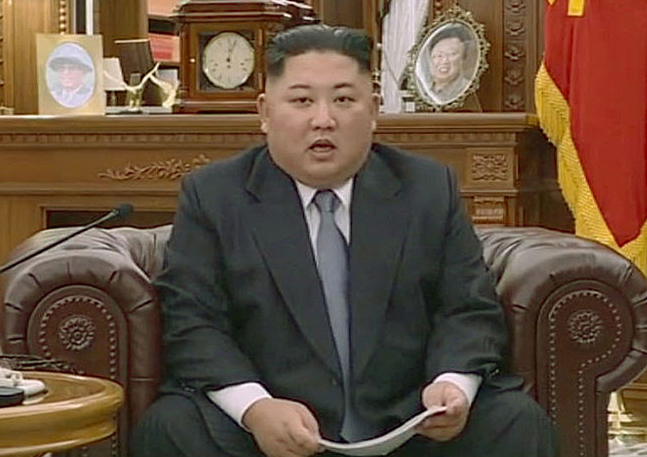 At this year’s Supreme People’s Assembly, Kim Jong-un was named “the highest representative of the entire Korean people”. Originally broadcasted by Chosun Central Broadcasting on January 1, 2019.

“We don’t have electricity for even a second. Not a blink. It’s like living in primitive times. With this prolonged ‘power-saving’, there are growing complaints about how much longer we will have to do endure,” said a reporting partner from the northern province of Yanggang in mid-April.

“Power-saving” is being instituted across an expanding region of residential areas. In April, ASIAPRESS surveyed various parts of North Korea, finding that electricity was not being supplied to an increasing number of areas in North Hamkyung Province, Yanggang Province, and South Pyongan Province.

North Korea depends on hydroelectric power for 70% of its electricity supply and, each winter, freezing conditions cause the power situation to deteriorate considerably. April usually brings some respite though, with electricity production returning to normal levels as frozen rivers and dams melt. Unlike in previous years, however, the electricity situation has not yet improved.

Meanwhile, government and party offices, police stations, and industrial centers are understood to be receiving electricity for about half of the day, although even this is not reliably supplied. (Kang Ji-won)

Facebook Twitter はてブ Pocket Feedly
RECOMMENDATIONS
＜Inside N. Korea＞ Would a visit by the Pope bring freedom of religion to North Korea, a country where even fortune-telling is illegal?
In early October, an unusual public event took place in Hyesan, North ...
North Korea’s Second Wave? (2) Faced with Starvation, Soldiers Stuck on Base Plead to be Quarantined with Better-Fed COVID Patients
(Continued from part 1) What is the coronavirus situation in North Ko...
＜Inside N. Korea＞ “City of Fear”: State Security Command Deployed from Capital as Economic Deterioration Gives Rise to Drug Trafficking, Prostitution, and Organized Crime
The North Korean authorities reportedly deployed the Ministry of State...
＜Inside N. Korea＞ "Why did they kill him?" How residents feel about the recent shooting of residents escaping into China
Ten days have passed since North Korean soldiers shot and killed three...
Discontent Over Special Rations and Criticism Towards Wasted Expenditures on the Launch
2012/May/04 Written by ISHIMARU Jiro, Editor in Chief, Rimjin-gangDesp...
＜Inside N. Korea＞ Government sets nighttime curfew at 6 PM..."Police arrest anyone who leaves their homes..." Why now?
Starting in November, the Kim Jong-un regime shifted the nighttime cur...