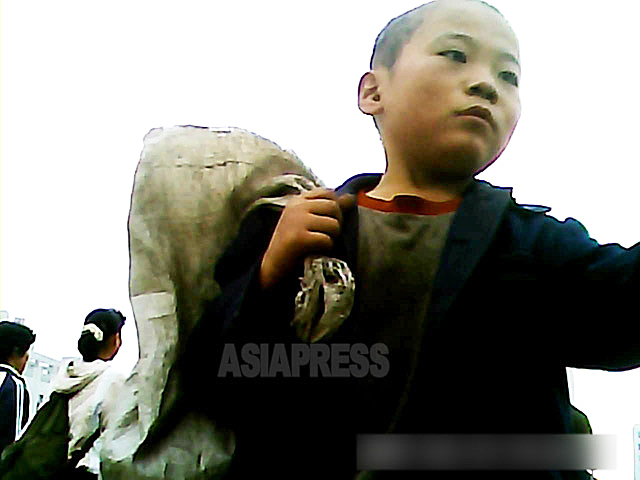 Homeless children, rarely seen in North Korea in recent years, have become a common sight since the beginning of 2019 and, entering April, their numbers have increased noticeably. The reason for this worsening phenomenon, it is speculated, is the international sanctions that have burdened the lives of those in provincial cities. (Kang Ji-won)

A reporting partner living in Hyesan City, North Yanggang Province, said on March 26, “Homeless children were hardly seen on the streets up until the end of last year but, now, if you go to the market, you can always see about 10. Most of them are teenage boys rather than toddlers. Lots wear ill-fitting clothes that are meant for adults and go around in pairs.”

In Musan County, North Hamkyung Province, there have also been reports of a marked increase in the number of homeless children.

Said a reporting partner, “To investigate, I went to the market for three days. Each time I went there were always about 7-8 children there. From what I could tell, 2 of the children were there each day and the rest were different children from each day before. When I asked them if they were from Musan County or somewhere else, they replied, ‘My parents disappeared. I’ve been abandoned.’ I suppose they must think that the Chinese border regions are faring better economically.”

In Hyesan City, a wing of the police called the “312 Group” is responsible for policies relating to homeless children. According to the reporting partner, most of the homeless children that come from outside the city are caught and, instead of being taken to an orphanage, are brought to a “collection facility”. However, as food is not properly provided at the “collection facility”, the children run away before long.

※The “collection facility” is a building that usually houses criminals from outside the region.

The reporting partner continued, “I haven’t been seeing children starve to death like they used to in the old days. As there are few people who give to the poor though, the children steal food at the market rather than beg, often by thrusting their hands into bowls of noodles that people are in the middle of eating.”

In Musan County, homeless children were originally looked after by the police who would check the children’s family situation and assume some responsibility for their custody. For children from other regions, however, the police have had no choice but to accommodate them at “collection facilities”.

The advent of homeless children is no doubt connected to the problems faced by all parents in North Korea. As the economy has worsened, families have had to sell their homes and, oftentimes, disperse. It can also be assumed that many parents of homeless children have died.

Meanwhile, due to international sanctions, the coal and iron export industries have taken a huge hit and many of Pyongyang’s wealthy elite are succumbing to the economic pressure as well. In addition, the domestic economy is getting worse by the day, with businesses operated by private citizens struggling to stay afloat.

Kim Jong-un has focused on measures to cope with the rising homelessness crisis, building orphanages in Pyongyang and across the country. Children loitering at markets and stations have been picked up and sent to these facilities and, thanks to improved food supplies, the number of homeless children was steadily decreasing over the last 3 years.

Facebook Twitter はてブ Pocket Feedly
RECOMMENDATIONS
＜Information＞ Voices of a Hidden People Released at Amazon
ASIAPRESS has published E-Book version of “Rimjin-gang: News from insi...
＜Photo Report＞ Kotchebi, the Homeless, Under the Kim Jong-un Regime (PART2) Toddler worn out on a street while regime shows off luxury orphanages
2016/Oct/27 The North Korean state media has often announced that Kim...
＜Photo Report＞ Kotchebi, the Homeless, Under the Kim Jong-un Regime (PART5) Toddlers and female Junior High School students roaming around a city. Some children have lost their legs.
2017/Jan/10 These pictures of “Kotchebi”, the homeless, were taken by...
＜Inside N. Korea＞ Military Cuts (Part 2): Frustrations Rise Amid Forced Deployment of Discharged Soldiers to Farms and Coal Mines
The Kim Jong-un regime has decided to drastically reduce the number of...
Stimulant Drugs Take Root in the Daily Lives of the N.Korean People (PART1)
2013/September/25 Written by LEE Jin-suDrugs Widely Used Among the Peo...
＜N.Korea Crisis＞ Why is there a Food Shortage Crisis in the Breadbasket Region of Hwanghae? (PART2)
2012/May/10 Written by LEE Jin-suFarming Villages' Crops Taken by the ...
Nationwide “Compost Battle” Begins Again: Cash-Strapped Regime Continues Missile Testing While Forcing Citizens to Collect Feces for Farm Use. ISHIMARU Jiro
North Korea’s annual "manure battle" has begun. This “battle” involve...
＜Inside N. Korea＞ Residents Face Starvation as Border City is Blocked Off to Contain Potential COVID-19 Outbreak
An outbreak of coronavirus is suspected in Hyesan, the central city of...
The lockdown in Hyesan suddenly lifted after only two days, due to strong opposition
Hyesan’s lockdown was suddenly lifted on the evening of March 4, just ...
＜Interview with N.Koreans＞ "Is it any better in Kim Jong-un Era? Not at all! Preferential treatment is given to the Party officials by sacrificing the needs of the residents in the regions outside of Pyongyang!"
2015/December/13 Edit by KANG Ji-won, defector reporter, Rimjin-gang &...