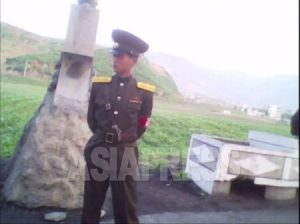 A policeman on patrol through a village. Taken by Kim Dong-cheol at South Pyongan Province on June 2010. (ASIA PRESS)

The State Security Department of North Korea recently resumed their investigation into families with missing persons. An ASIAPRESS reporting partner, living near the Sino-North Korean border in North Hamkyung Province, reported on the people summoned for interrogation.

Through questioning, the State Security Department is gathering information on the date a family member went missing, why the family member is thought to be missing, and the person’s suspected whereabouts.

“Targeted families usually assume that the authorities are looking to classify the missing as individuals ‘gone to South Korea,’ or ‘gone to China’. Authorities are doing this by checking the criminal record (smuggling with Chinese, contacting Chinese-Korean, and any record of earning through smuggling) of missing persons,” explained the reporting partner.

He confirmed that investigations are continuing in many neighborhood watch groups in his county. He wasn’t, however, certain on whether or not the investigation is underway at the state level.
Related article : ＜Photo Report on N.Korea＞ N.Korean People’s Army Facing State of Starvation

The State Security Department and the People’s Securities Department have carried out investigations into border area missing persons since the famine of the 1990s. On occasion, if a missing person is found to have fled to the South, they expel the family of the defector inland, as a means of preventing their subsequent escape.

Accordingly, it is common for the family of the missing to claim ignorance as to the whereabouts of an absent member, or to offer a bribe to state security agents to avoid punishment.

In some cases, a family member might try to pass him or herself off as the missing person. This is done in an effort not to be labelled as “families of escapees to the South”.

1 2
Facebook Twitter はてブ Pocket Feedly
RECOMMENDATIONS
＜Photo Report＞ Abandoned Elderly (PART1) Collapsed Social Welfare System Has Left the Elderly on the Streets.
2016/Jul/26 Children and the elderly are the biggest victims of the c...
N.Korea Food Shortage: Not a matter of absolute shortage, a matter of distribution and access -1
Not a matter of absolute shortage, a matter of distribution and access...
＜Inside N.Korea＞ Total War Is Impossible for N.Korean Army
2017/May/11 Many Japanese media in the recent month have produced th...
Stimulant Drugs Take Root in the Daily Lives of the N.Korean People (PART4)
2013/November/15 Written by LEE Jin-su<< PREVIOUS (PART 3) Ferti...
＜N.Korea Crisis＞ Why is there a Food Shortage Crisis in the Breadbasket Region of Hwanghae? (PART1)
Written by LEE Jin-su2012/May/07 Possible reasons other than a simple ...
＜Inside N. Korea＞ Capital Punishment: Foreign Cash Crackdown Feared After Kim Criticizes Citizens’ Neglect for National Currency
◆ Public criticized by Kim for neglecting North Korean bills “Our nati...
＜Inside N. Korea＞ The Deteriorating Plight of the People (3) Economy Reaches State of Panic [ISHIMARU Jiro]
In June, the economic turmoil began to take on the appearance of panic...
＜Inside N. Korea＞Domestic Currency Appreciates by 22% as RMB and U.S. Dollar Mysteriously Plunge Again
The actual exchange rate of the RMB and the U.S. dollar recently plum...
Truancy Increases In Northern Regions As Schools Demand More Money From Parents
2014/April/29Written by PAEK Chang-ryong, a defector reporterThe launc...
＜Inside N. Korea＞ Regime Strikes Gold: Authorities Lock Horns with Locals in Sudden Gold Rush
The discovery of large amounts of gold dust in a northern river is sai...