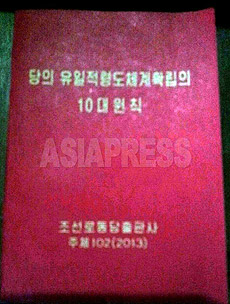 In North Korea, the "Ten Great Principles for the establishment of a monolithic thought system of the KWP" was previously considered as the supreme guiding principles of the whole state, positioned beyond the constitution and the program of the Korean Workers' Party.

From June to July of this year, the title and articles of the system were revised to the "Ten Great Principles for the establishment of a monolithic leadership system of the KWP". This is the first change made in 39 years.

Under the new Ten Principles, both Kim Il-sung and Kim Jong-il are positioned as equals. In other words, both leaders are revered as 'two Divinities'.

It would be fair to assume that these actions are designed to bolster the legitimacy of Kim Jong-un (in the new Ten Principles, he is represented as the 'Party'), as he is the only deputy and successor to the late 'Great Leaders' and, as such, destined to inherit their divine right to rule.

The Ten Great Principles, which was secretly smuggled outside of North Korea, is a pocket-sized book, around 10cm long (=3.9inchs). It is obligatory for all party members to be able to recite every single line of the Principles. 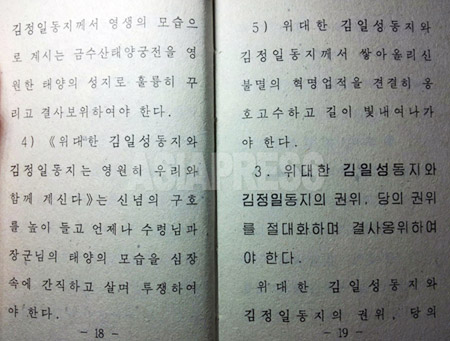 Article 3 of the Ten Great Principles reads, "Make absolute the authority of the Great Leader Comrade Kim Il-sung, Comrade Kim Jong-il and the Party, and defend it to the death." In this statement, "the Party" refers to Kim Jong-un. (Courtesy: Free North Korea Radio)