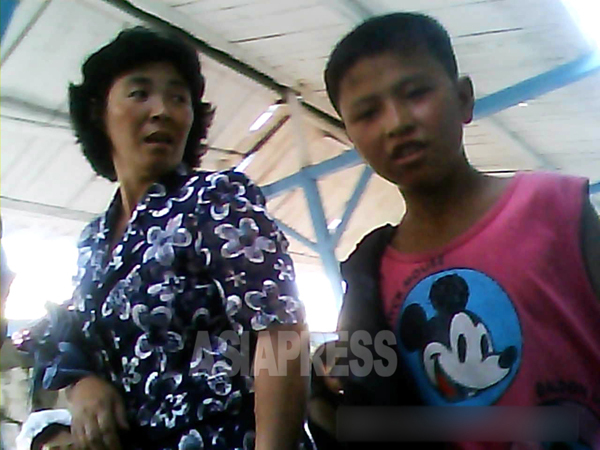 (Photo) A young man walks through a market while wearing a Mickey Mouse t-shirt, a symbol of “enemy culture”. Photographed in Hyesan City in August 2013 by ASIAPRESS

Recently, resistance has been mounting among young people against the state’s intensifying crackdowns on clothes and hairstyles considered to be “non-socialist”.

In late July, a reporting partner living in the northern province of Ryanggang said, “A public morality enforcement team called the ‘gyuchaldae’ stands by the side of the street, checking people’s clothes, hairstyles, and shoes. They confiscate items, give fines, and, in some cases, will even cut a person’s hair on the spot. This has led to constant arguments with citizens who oppose the crackdowns.”

According to the reporting partner, a woman in her early 20’s who had dyed her hair brown, was apprehended by the ‘gyuchaldae’ in Hyesan on July 12. When she resisted, there was a commotion but, in the end, she had to cut her own hair with a pair of scissors.

If caught by the ‘gyuchaldae’, citizens must write a piece of self-criticism and, sometimes, face criticism from others at ideological training meetings. To avoid this punishment, the apprehended citizens must give bribes. The Hyesan woman, however, is said to have cut her own hair out of indignation.

Women wearing straight pants and high heels which accentuate the shape of their legs, seem to be the main target of the ‘gyuchaldae’. When apprehended women complain, “What am I supposed to wear?”, the officers respond, “Wear simple pants and flat sneakers, as women did in the ‘90’s”.
Next page : ◆ Small resistance led by rebellious young people