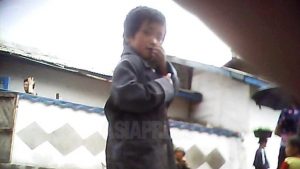 A kotchebi wearing an oversized jacket for an adult. June 2013. Ryanggang Province

“Kotchebi” is a North Korean word only. It is not in the Korean dictionary since it is a slang used only in North Korea.

In 1997, a large number of North Korean people defected into China. What was going on in North Korea? In order to understand the situation inside North Korea I met with a number of defectors one after another in the Yanbian Korean Autonomous Prefecture in Jilin Province, China.

All the refugees said the same thing, “Black markets and transport stations are full of kotchebi. They have become beggars and thieves, stealing food. The dead bodies of the kotchebi are left laying in the streets.” I had never heard of the word “kotchebi” before this. The word refers to the homeless people and street children who have lost their parents and have ended up living on the streets.

Again, the word kotchebi is not in the Korean dictionary. None of my South Korean friends knew the word or where it originated from. In the South Korean language “Kot” means a flower and “Chebi” means a swallow. Therefore, they guessed that kochebi means “flower swallow”.
Related Article: [Video Report] Kotchebi Girls, Sexually Abused and Exploited

The word kotchebi has become prevalent in North Korea apparently because the way the kotchebi roam around in search of food, to everyone there they resemble hummingbirds hovering from flower to flower.

Once I had an interview with an old but highly knowledgeable North Korean defector and asked him the origin of the word. He immediately denied the assumption mentioned above and said that, “it actually came from the Russian language. In Russian, “кочевой” means “wandering” and “nomads”. After the Korean Armistice Agreement was signed, people from the Soviet Union came into North Korean to support restoration. They called homeless people “кочевой” and it gave birth to the word kotchebi in the North Korean language. 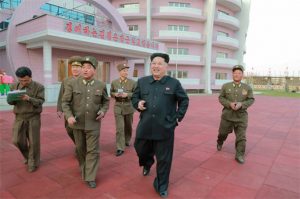 Kotchebi, the Homeless, Under the Kim Jong-un Regime

ASIAPRESS reporting partners inside North Korea said that, “The number of kotchebi has drastically decreased under the Kim Jong-un regime as compared to the last decade where they gathered at markets and transportation stations all over the country.”

An ASIAPRESS reporting partner working as a middle manager at an administration reported that, “The government ordered the building of orphanages, and to clear all kotchebi from the streets, and to shelter all of them there [the orphanages]. Rumor has it that it is because Comrade Kim Jong-un was angered because South Korean and Japanese TV programs have repeatedly broadcasted the kotchebi topic.”

This reminds me of something essential to my job. Since North Korea restricts the flow of information, it is difficult to verify the information given by interviewees.  Therefore, the ASIAPRESS reporting team where I belong has dedicated itself to only presenting information to the public that has strong strong evidence. Obtaining this first-hand information from inside North Korea such as photos, voice recordings, videos, and documents is of the utmost significance for us.
Related Article: More Kotchebi Homeless Children Under the Kim Jong-un Regime

Reporting partners inside North Korea have secretly taken videos at numerous provinces since the early 2000s. A lot of kotchebi could be seen in the footage. Any city had a number of kotchebi at markets and in front of transportation stations.  Japanese, South Korean, American, and European media have repeatedly broadcasted those scenes.

The North Korean government has consistently shown the sophistication of central Pyongyang to foreigners; through the state media they have propagandized how “developed” North Korea is. The revelation of the kotchebi to the outside world has weakened the intended effect of this propaganda and has ended up tarnishing the dignity of the absolute leader Kim Jong-un. If Kim Jong-un himself ordered the detention of the kotchebi it would mean that he is operating with hostility toward the leaked footage of the kotchebi to the outside world, which can be seen as ‘strong evidence’ of his failures to address the poverty in North Korea. The regime built up to date and large-scale orphanages in Pyongyang and Wonsan. He has repeatedly visited there and conveyed his “love towards the children” by staging a photo-op of hugging children and patting their heads.

Regardless of the effort the kotchebi still continue to exist in North Korea. Children are still turning into kotchebi because their parents are dead or have abandoned them due to their inability to take care of them. Numerous people in North Korea still suffer from extreme poverty. The social welfare system operates in name only since its collapse in the 1990s. There is no systemic safeguard in North Korea for those who are vulnerable to falling into extreme poverty. If Kim Jong-un seriously wants to eradicate the kotchebi then the fastest way would be to re-build the social system in which the people are able to get the support they need, not by building large luxurious orphanages intended for propaganda use only.  (ISHIMARU Jiro)

Facebook Twitter はてブ Pocket Feedly
RECOMMENDATIONS
＜Inside N. Korea＞ Growing Radicalization of People's Control (2): The Return of "Word Hunting"…One Word of Complaint Can Result in Arrest or Banishment
In North Korea, there are strong indications that "word hunting" is b...
Kim Jong-un's Mother, Ko Yong-hui, was Born in Osaka: Did She Share Her Memories of Japan with Her Son?  ISHIMARU Jiro
In June 1962, a 10-year-old Korean girl residing in Japan, originally...
Secondhand Bookstalls Still Active in N.Korea
The Daily Life of North Koreans:  2014/March/15 Written by PAEK Chang-...
＜Inside N. Korea＞Military Cuts (Part 1): Military service for men cut from 13 to 8 years... What are Kim Jong-un's intentions?
According to a research conducted by our reporting partners living in ...
＜Inside N. Korea＞ The People’s Pipe Dream: "Trump will be impeached and the sanctions lifted"
Rumors are spreading in North Korea that President Trump will be impea...
Rising discontent as control reinforced to prepare the 7th Workers Party Conference in May… Forced labor to the runaways from their work places and coerced savings to banks…
Declaring nationwide 70 days battle (*1) to prepare the Workers’ Party...