Two years after Kim Jong-un's inauguration, social disparity in North Korea is rising.
Two years have passed since the First Secretary Kim Jong-un, alleged to have been born in 1983, succeeded his father, Kim Jong-il. The young leader has since been devoting all of his energy to tasks such as purging top officials to consolidate his power in the state structure, and prioritizing the construction of amusement parks to boost his national prestige; all this despite the desperate wishes of the public to lead a life with fewer burdens - something unattainable for the majority of the population. Economic stagnation is steadily eroding the nation. In the past two years, disparity between the rich and poor has increased. As a result, vulnerable citizens neglected by the government, including many children, have lost their homes and become known as kotchebi. (*SEE NOTE BELOW)

These images are taken from videos filmed in North Korea by our reporters and reporting partners. Recordings were made in the period between March and August, 2013. These images depict a part of the real lives of North Korean people which the government never shows in the state-run media. 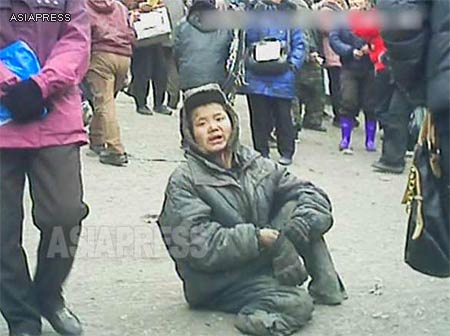 A homeless kotchebi boy sits near the entrance of the marketplace in Pyongsong, South Pyongan Province. He was begging for food and money. His legs were supposedly amputated by an accident. (March 2013)  ASIAPRESS

A boy who purportedly lost both of his legs in an accident was sitting on filthy ground near the entrance of a marketplace. He was dragging his body with his arms and begging from passersby. There were many people walking by in the market, known for being one of the biggest transportation hubs in the country, but no one gave the boy any handouts while the video was recording. 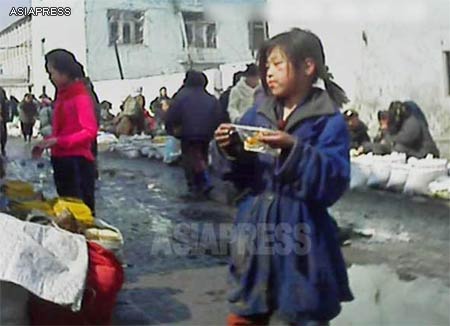 A kotchebi girl gazing at food on display in street stands. A plastic bag with a small amount of food was in her hands. (Pyongsong, South Pyongan Province, March 2013)ASIAPRESS

This girl was walking around food stands in the marketplace. She was nibbling bits of food from a small plastic bag. Her eyes never left the food in the stalls. 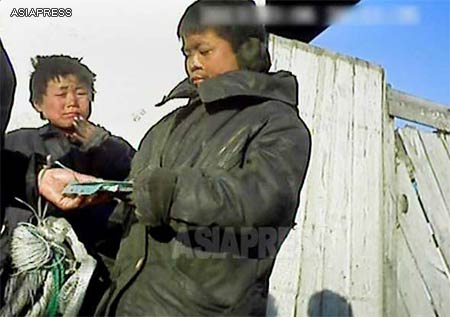 Two homeless kotchebi boys were shrewd businessmen. They approached the reporter in a candid manner: "Hey, there's a movie on this CD, I'll make a good bargain for you!"
They said one copy of a video CD costs 2,000 won (around 20 U.S. cents), but a bulk order would be 5,000 won. There are frequent crackdowns on illegal video CDs in North Korea. Many passersby at the market spoke to these boys sympathetically. 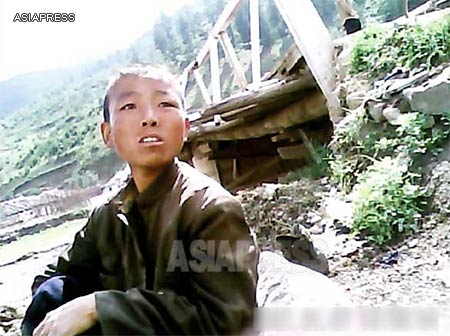 A kotchebi boy who appeared to be in his early teens spoke to the reporter and explained his circumstances. (A city in northern North Korea, June 2013) ASIAPRESS

A reporter approached a kotchebi boy who was washing his legs at a riverbank. The boy said that he had lost both of his parents and was taken to a children's homeless shelter run by the local government. He described the reality of the shelter as a facility that forces its inmates to work without compensation. After he developed leg pain and could no longer work, the facility expelled him, telling him, "Find a way to support yourself." The boy recounted the story with tears running down his cheeks and lamented the shelter officers' heartlessness.

The reporter asked him whether he had eaten that day. He replied that he eats when he can procure food, but goes hungry when he cannot. But, he stated flatly, "I won't beg people for handouts." He said he earns a living by collecting wild herbs that grow in the mountains and selling them. It was clear that this small, thin boy had a tough spirit for forging a life through his difficult circumstances. 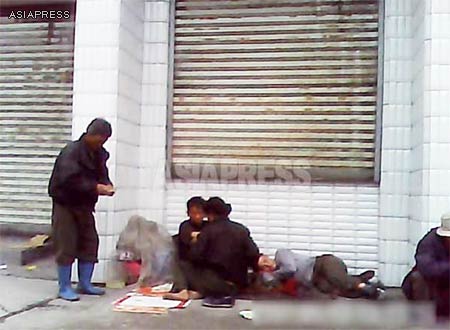 A kotchebi family huddles against the wall of a building in front of the railway station to avoid being rained on in a northern city. (August 2013) ASIAPRESS

There are deprived children in perhaps every country of the world. However, North Korea is a place where the state proudly proclaims itself as having "nothing to envy," and insists on touting its Juche philosophy-based socialism as the most developed social system in the world. The children in these pictures are the tragic outcome of such state policies. They were barred from the ration system and cannot receive any form of social assistance.

While the Kim Jong-un regime proceeds with the third generation of power succession and proudly boasts luxury amusement parks to the media, homeless children who will not have any chance to visit such facilities in their lifetimes are quietly dying in the streets under bitter winter winds, and no one cares about their cruel destiny.
My heart wants to burst when I see the harsh circumstances these children face daily in the current state of my homeland, North Korea.               ### Rimjin-gang

Facebook Twitter はてブ Pocket Feedly
RECOMMENDATIONS
＜Inside N. Korea＞ The maximum penalty for the "Korean Wave Suppression Act" is death. Still, K-pop is popular among young people.
"These days, Hallyu culture, which is popular among my daughters' gene...
＜Internal Survey of N. Korea＞ Coronavirus Economic Crisis Forces Married Women into Prostitution, Urban Poor into Foraging, and Orphans into Begging
◆ Vulnerable groups face humanitarian crisis In North Korea, where the...
＜Inside N. Korea＞North Korea implements special security measures ahead of Foundation Day
◆All entry into Pyongyang blocked off Reports indicate that, from Sept...
＜Photo Report＞ Kotchebi, the Homeless, Under the Kim Jong-un Regime (PART2) Toddler worn out on a street while regime shows off luxury orphanages
2016/Oct/27 The North Korean state media has often announced that Kim...
＜Inside N. Korea＞ Bank Card and ATM Appear in Local Cities. Split Responses; “Convenient” and “Still Can’t Trust the Government.”
2017/Jan/6 Following the issuance of bank cards for companies and ind...
＜Inside N. Korea＞ Regime Maintains 8 Year Enlistment Policy but Shifts Focus to Training University Graduates for “Scientific Warfare”
A domestic investigation conducted by ASIAPRESS has revealed that the ...
＜Trump-Kim Jong-un Meeting＞ Cynical Citizens Told “Not to Fantasize” by Pessimistic Party Officials
◆ Lessons learned from the disappointing failure of Hanoi Kim Jong-un ...
＜Inside N. Korea＞ Hopelessly High: Regime Combats Rising Drug Abuse as Citizens Seek Escape From Reality
◆ Are even elementary school students engaging in drugs? A ‘public den...
＜Inside N.Korea＞ Expansion of the market economy as the driving force behind social transformation--based on sources from inside N.Korea. (PART7) Information from outside being commodified and spread across the country. The government is losing control of the movement of citizens. by ISHIMARU Jiro
2016/Dec/28 5-3 The control of information is being weakened The Nort...
＜Latest Report from N. Korea＞ Regime Aims to Block Coronavirus at Border as Local Hospitals and Populace Remain Woefully Unprepared for Potential Outbreak
The North Korean authorities have announced through state media that t...