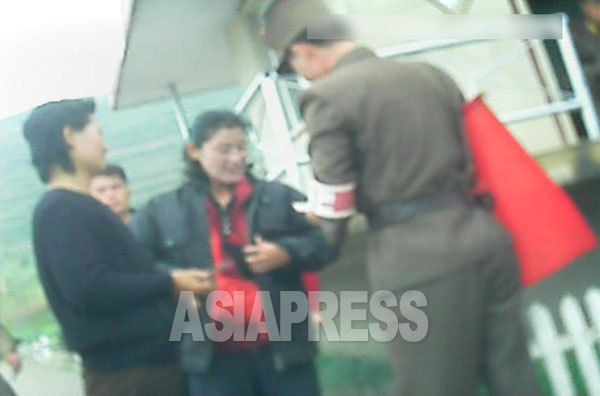 (Reference Photo) A Ministry of State Security officer at the '10th Guard Post' checking for travel permits. Taken in a northern province of North Korea by Mindulle in October 2013. (ASIAPRESS)

While the Kim Jong-un regime is abroad promoting itself as a partner for dialogue, it is also strengthening its surveillance of and control over the activities of North Korean citizens.

One of the methods used to monitor the activities of residents is the 'census'. Police officers and leaders of the Inminban (neighborhood watch group) visit homes to check for inconsistencies between the family’s official register and its actual residency situation. Even though the North Korean government issued new "nationality cards” in 2011, the Kim Jong-un regime is working on creating new identification cards to oversee residents and deal with the large numbers of defectors, missing persons, and people relocating without authorization.

"Citizens have been getting their photos taken since the end of last year for the card renewals. The government said the cards would be reissued by May, but I heard there had been a delay and that it was going to take until August," says an ASIAPRESS reporting partner from a northern province of North Korea.

There is no freedom of residence or movement in North Korea. However, there are still residents who secretly relocate in search of more favorable economic conditions or, in some cases, escape from North Korea. Due to wide-spread corruption among government officials and executives, bribes are frequently used in these situations to avoid trouble.

"If a family leaves North Korea to go to the South, they pay bribes in advance for authorities to report them as missing or dead. However, many still fear the ‘census’ since the truth behind these false reports may be discovered if a thorough investigation is conducted," explains our reporting partner.

The international community is also involved in the 'census'. In October this year, the North Korean government planned to undertake a joint census with the United Nations Population Fund and requested their financial support. The United Nations Population Fund asked South Korea for a financial contribution of six million USD, to which the South Korean government agreed. However, through a census funded by the United Nations, the Kim Jong-un regime could secure an effective system for surveilling and controlling its citizens.
Next Page : Strip searches conducted on women...