Across North Korea, from the end of October onwards, news of public and private executions continue to emerge. Those executed are charged with offences in connection with 'Impure recorded material' including the smuggling, circulation, buying and selling of South Korean dramas, it is reported. Multiple sources from inside North Korea are reporting directly on the latest crackdown. 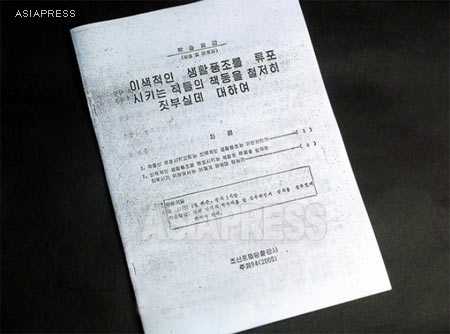 A pamphlet is titled "Concerning the thorough destruction of the enemy's plot to spread heterogeneous lifestyle". This is a studying reference distributed for party members and workers, published by the Korean Workers' Party Publishing.
On page 5, the words by "Dear Leader Comrade Kim Jong-il" are quoted.
"Currently, our enemies are persistently deploying malicious psychological conspiracies aiming to tear us apart from inside, and continuously smuggle in impure recording materials which contain decadent South Korean and American movies".
Page 7 points more precisely that 'impure video CDs" are smuggled in on a massive scale, and calls for a 'struggle' to fight against these acts saying "those who smuggle, sell, secretly watch and circulate, shall be instantly smashed without any mercy, and we shall never allow these activities to emerge again". (The pamphlet was obtained in 2005 by our North Korean reporter Lee Jun.) ASIAPRESS

In early November a reporting partner living in North Hamkyung Province reported by telephone that in North Korea's third largest city, Chongjin city, three people were executed in connection with the spread of such illicit materials.

"On October 29th in Chongjin City, three persons were executed by firing squad. This news came from XX neighbourhood police officer who himself was given the news directly from his superior officers. The crime, according to the police officer, was termed as being related to 'Impure recorded materials'. It was further reported that at Kim Chaek Ironworks a further two people were similarly executed. These were not public executions."

According to our reporting partner in Chongjin, the heavy penalties imposed on anyone caught with such 'impure material' come as part of policies passed down directly from the top aiming at a renewed crack down on such crimes.

The fact that these issuances, published in late October, are regarded as 'policy'(방침) indicates that they came directly from North Korean leader Kim Jong-un and that North Korean society is currently a top priority for the young leader. Kim's policies require absolute obedience from North Korean citizens.

Reports have also emerged at different times from other areas within North Korea on similar charges leading to firing squad executions. On 30th October South Korean based, North Korean defector-run organisation "Free North Korea Radio" cited sources inside the North, reporting that on 27th October, in the Northern Province of Ryanggang, two people were executed in similar fashion while six others were sentenced to time in a correctional facility. This report was widely cited and reproduced within the South Korean media. 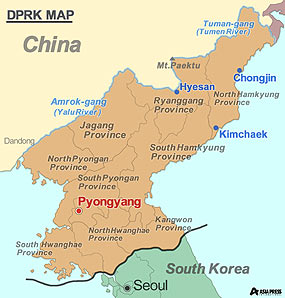 ASIAPRESS received reports on the Hyesan firing squad executions from separate sources, the following testimony, however, was almost identical to others coming out of North Korea;

"In Hyesan City, at the end of October, officials in the area were gathered together and judgement was passed on the cases of six individuals. Of the six, a man and a woman in their forties were executed by firing squad, the remaining four persons were sent to a correctional facility. The crimes of these individuals was announced as the illegal importation and distribution of 'obscene recording materials'."

Between these reports the number of people published differ, however the timing of the events and the details are identical and the information is considered reliable.

Hyesan City is close to the Chinese border and a great deal of black market trade and information flows from both sides.

Since August, North Korea launched the crackdown on the spread of 'Impure recordings'.