2014/January/29
Written by PAEK Chang-ryong . a defector reporter.
<This report first appeared in Korean and Japanese edition of a North Korea report on November 2013>

Our reporting partners in North Korea explained the situation of farmers via phone conversations. According to their reports, the state initially collects and withholds the rice, intending it to be used for the military. Furthermore, the discontent of those who labor in the fields is growing as they are ordered to contribute additional rice in the name of "support for the military". 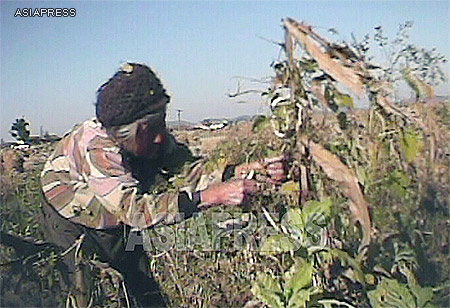 (REFERENCE PHOTO) An old farming woman picks up the rumps from the ears of dried corn in a post-harvest field, to ease her family's food condition. (In a village near the city of Sariwon, North Hwanghae Province. September. 2008. Taken by Shim Ui-chun)  ASIAPRESS

A reporting partner, living in the northern province of Ryanggang, gave us the following information concerning food allocation in the farming collectives via a phone call made on the 12th November.

" We have just finished the harvest work for the year. But this year's allocation for each farmer, as compensation for their labor, is less than the prescribed amount because the state preliminary collects rice for the military. Despite these compulsory collections, ranking officials at the farming collectives force farmers to tell the allocation inspector that they have received the prescribed amount. Added to that, the state devotes all efforts to contributing as much food from the harvest, including corns and frozen potatoes which are supposed to be kept as easily preserved food for the farmers' family, to the military."

Another reporting partner who lives in the country's northeast, North Hamkyung Province, told us on 13th November:

"In our farming collective, the allocation for each farming family was only six months amount of corn as a ration (in compensation for a year's labor). This came to 145 kilograms (=320 lb) of corn with husk. But the administrative officials told us to return 50 kilograms (=110 lb) from this allocation because the collection of rice for the military was not reaching the required target. They said the difference for each family would be distributed later. But nobody believes them."

This information emphasizes the fact that the collection of rice for the military is the utmost priority for the state. Under these circumstances, discontent is growing among the farming community. According to the reporting partner, farmers are expressing that they want to give up farming and find alternative ways to earn their living if this cruel treatment continues. The authorities caught wind of this disturbing trend among the farmers and issued an announcement promising that food will be allocated every month as a ration, according to the attendance at the collective. However, a reporting partner explained that the dissatisfaction of the farmers was unlikely to be so easily placated. 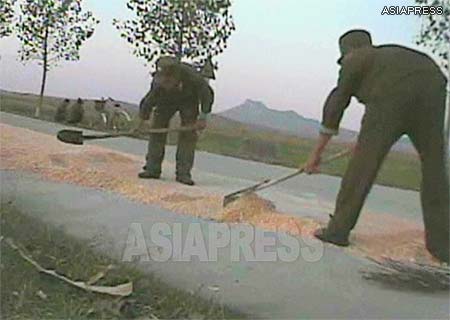 (REFERENCE PHOTO) The Korean People's Army soldiers collecting dried corn for the troops. According to a local farmer, these were the corns that farmers left out from cultivation, but the army directly seized them from the field and confiscated everything as military supplies after they were dried. (Kwail County, South Hwanghae Province. October. 2008. Taken by Shim Ui-chun) ASIAPRESS

Compulsory collection of rice for the military has in the past lead farmers to starvation
The Kim Jong-un regime is making the collection of rice for the military a priority for state policy. This results in the impoverishment of farming collectives and is forcing farmers to endure serious living conditions. The above-referred Ryanggang and North Hamkyung Provinces are located in the cooler northern mountainous areas. As a result, the cultivated acreage is less, and the harvests are less plentiful compared to other provinces. In these areas, winter is longer and farmers have to make it through a period when food supplies run perilously low, before the weather warms and crops can once again be gathered. In consideration of these facts, the excessive collection of rice for the military is nothing short of disastrous for struggling farmers.

A reporting partner in Ryanggang Province expressed the following concerns regarding the situation of farmers.

"This year, the amount collected for the military was quite a lot. It will cause unknowable damage for farmers when they face the shortage period in spring. When they finish the potatoes that they planted on their small private plots and the small amount of allocated grains, they will not have anything to eat in the spring. There are some farmers who may die of the food shortage."

In North Korea, this kind of situation is frequently occurring. Especially in 2012, in farming villages in the North and South Hwanghae Provinces commonly known as North Korea's breadbaskets, there have been tragic food shortages that have resulted in more than ten thousand people starving to death due to the excessive collection of rice for the military.

On the other hand, since the beginning of this year, the state has partially revived the food rationing system for city dwellers by releasing stockpiled rice known as "Rice Number 2", which was previously reserved for a wartime emergency situation. However, given the fact that the state is imposing strong measures to collect rice for the military, there is speculation among people coming in and out of North Korea that the release of the stockpiled rice is nothing more than a replacement of the old stockpiles of military rice.

The Kim Jong-un regime, which has recently passed the two year mark since inauguration, repeats such acts of absurdity that thoroughly exploit farmers who produce the food by suffocating them, and then preferentially distributing the food stocks to the military and city dwellers, including the capital city, Pyongyang. First Secretary Kim Jong-un made an announcement last April that the priority agenda of the state is the improvement of the lives of the people. However, it is an absurd idea for the poor farmers who endure such harsh exploitations by the state.