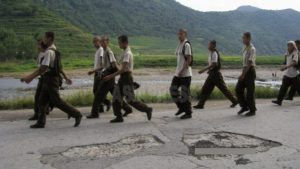 (Reference Photo) Soldiers on move are gaunt. Taken by Chang Jong-gil at suburb of Pyongyang in August 2008. (ASIAPRESS)

The People’s Army of North Korea have worked to reinforce protective wall of hardened gallery and executed emergency drill against air strike since mid -April. But as materials and foods are so poorly supplied, soldiers with malnutrition have reportedly increased. (Kang Ji-won)

Order to protect against cruise missiles by waste tires

A person related to the military in Chongjin City told it to ASIAPRESS on May 17, “Recently, there was an order to cover every gallery site, including 20 meters of range from its entrance where strategic weapons and military trucks are stored with waste tires as a measure to protect against cruise missile attack. The soldiers who should secure waste tires are busy in stealing tires even from farm cart. The military had secured waste tires previously followed by an order from the above. But a new order was given since soldiers had stolen them to cook and heat due to the poor supply of fuel. Even though the soldiers are securing waste tires, they would be gone as fuel again within a couple of days.”

Evacuation drill against air strike was executed like a real battle along with the work to reinforce gallery. However, the officers in charge of the base make sarcastic remarks on the order, saying “We have been in the gallery for two days and performed emergency call and evacuation drill against air strike twice until May 17. The officers make a mockery of the order; it is better for the soldiers to disperse out of the gallery reinforced by gunnysacks rather than to escape into it, because, if the war broke out, it would be a nuclear one.”

It is said that mal nutrition of soldiers and shortage of food in the military base are getting serious as the tension keeps going.

The person concerned said, “Moving is forbidden except special cases. Supply of food is getting harder as only one squad out of the whole company can work for side farming. The number of weaklings is increasing as moving is prohibited for the preparation of battle even under the short supply of food. We provide barely three meals a day. Three members of a squadron of 10-12 soldiers are often weaklings (malnutrition) and tuberculosis patients are increasing in the military hospital due to malnutrition. As the hospital doesn’t have enough medicine, the soldier patients are discharged and go back home right away after 15 days since they have entered the hospital. The numbers are increasing.”

Kim Jong-un regime seems to be afraid of Tomahawk missile attack by the US from the ‘order to prepare for the cruise missile attack’ mentioned by the above military personnel.

*ASIAPRESS sends Chinese mobile phones into North Korea to cover its inside story.

Facebook Twitter はてブ Pocket Feedly
RECOMMENDATIONS
＜Inside North Korea＞ “The 7 Year-Old Sent From God”: Why Fortune-tellers are Thriving Despite Regime Crackdown
According to a reporting partner from Ryanggang Province, fortune-tell...
＜Inside N. Korea＞ Investigating the Cause of the Suspiciously Rapid Appreciation of the N. Korean Won
It was at the end of October that the abnormality was detected. The ex...
＜Latest Report on N.Korea＞People Trapped Behind Barbed Wire (4 Photos)
In late July ASIAPRESS reporter recently visited the Yalu River on th...
Discontent Over Special Rations and Criticism Towards Wasted Expenditures on the Launch
2012/May/04 Written by ISHIMARU Jiro, Editor in Chief, Rimjin-gangDesp...
＜Photo Report on N.Korea＞ Experiencing the Lives of Ordinary People, “Sobicha“ (service car)
2016/Nov/24 ASIAPRESS reporting partners in North Korea said that the...
＜Inside N. Korea＞"Crash Landing on You" Finally Reaches N. Korean Screens: Interviews With the Women Risking their Lives to Watch It
At last, or should I say finally? The South Korean drama "Crash Landin...
The Purge of Jang Song-taek - "Self-Criticism" Campaign Launched
2013/December/11 Written by PAEK Chang-ryong, a defector reporter. Rec...
N.Korean Workers' Party Imposes Tough Measures to Maintain Discipline
- State accelerates social mobilization for loyalty to Kim Jong-un 201...
＜N. Korea Pro Report (Part 3)＞ How is N. Korea’s Economy Faring in the Face of the Coronavirus Pandemic and Continued Sanctions? A Look at the Regime’s “State Smuggling” Operations
After strong sanctions were imposed by the U.N. Security Council, the ...
[Video Report] N.Korea Soldiers selling seaweed at a market
In July 2006, North Korea successively conducted missile tests which w...