A young cadet soldier, age of 26, spoke about the food condition of his troop.(March, 2011. North Pyongan Province; Taken by Kim Dong-cheol) (C)ASIAPRESS

I have visited North Korea's north-west area, mainly North Pyongan Province, from this January to April. I made around 10 hours of video-shooting with my hidden camera. I have heard that part of my video report was publicized in the world media via Asiapress, and it has received a lot of feedback from many people. I was excited to hear my work and reports reach overseas.

On the other hand, I was told that there is lack of understanding on the current food situation in North Korea. In this report, I would like to marshal and summarize the situation of food shortage in our country, especially focusing on the military food condition by introducing my interviews with soldiers.

Corn meal is a North Korean's staple food. Middle one is mixed bowl with white-rice and corn. It is called "O-dae-O" (fifty-fifty). (March,2011. Hyesan city, Ryanggan Province ; by Choi Gyon-ok)(C)ASIAPRESS

In March, I visited an area in North Pyongan Province. I spoke to two young soldiers. Their lapel pins show they belong to a cadet troop. North Korea has a conscription system. Some go to military college while they maintain their position in their original troop and its graduates become enlisted officers.

One was 26 years old and the other was 29. I asked about their food conditions. They start talking to me about the conditions of the troop that they belong to.
Since it was impossible to identify myself, this video interview was recorded with a hidden camera.

Kim: Do you have regular meals?
Soldier 1: Yes. I have just had a meal today.
Kim: What kind of meals do you have? (in the military)
Soldier 1: Corn meal.
Kim: How is the size of portion?
Soldier 1: Well, it looks... appearance looks nice. 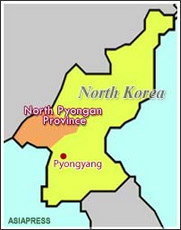 He doesn't say much about the precise condition of food. From his evasive answers, I felt he was told from his superior not to talk to someone about food conditions in the military.
He had a spade in his hand.

An emaciated young soldier is stripping corn husks which he stole from a cooperative farm. (September, 2008. Kangdong County, part of Pyongyang. Photo by Chang Jeong-gil) (C)ASIAPRESS

He talked to the other cadet soldier standing next to him. He seems to be this soldier's acquaintance but belonging to a different unit.

Soldier 1: (talking to other soldier) Actually I came to collect wild shepherd's-purse.
Kim: Shepherd's-purse?
Soldier 1: Yes. I left my troop quietly to get it because my officer-comrade did not have enough side dishes.
Soldier 2: I came out to patrol the water-supplying pipe.
Kim: Water pipe? Water is being stolen?
Soldier 2: Water goes to my troop from this position. But there are many residents who get water by making a hole in the pipe. Then water pressure goes down in our troop compound. So I came for patrolling.
Kim: Oh, yeah. (asking to other soldier) You came to collect shepherd's-purse, right?
Soldier 1: Yes.
Kim: I'll give you salted vegetable. Then you won't need to get wild shepherd's-purse.
Soldier 1: Right.
Soldier 2: I know it all goes to officers even if we do our effort to collect it. (We) Cadet students cannot have the share....

Artificial meat is made
by solidifying oil squeezed from
soybeans. It is a popular source
of protein in North Korea. People
cut off links and prepare it stirfried
with vegetables. Because
of its similar texture, people fool
themselves into believing they
are eating real meat. it
is shaped like a belt and coiled
into a roll. It is sold by the kilo or meter. When hot it is edible,
but when it gets cold after
sitting too long it becomes hard
and difficult to eat.(December, 2008. Taken by Lee Song-hui)
(C)ASIAPRESS

Kim: Even officers don't have side dishes?
Soldier 1: There is some artificial-meat.(*1) But it is not enough.
(*1: Note - Dried soybean lees)
Kim: You guys don't have even salted vegetables?
Soldier 2: We have something like that. But those are not pickled in a jar or pot, but in a bag made of cloth.
Soldier 1: It gets moldy easily.

I spoke with them in a familiar attitude. After a short talk, the soldiers began to talk about food conditions.

Kim: What is your meal portion like?
Soldier 1: ... I can't figure it out. Because it's so poor.
Kim: Such an awful condition?
Soldier 1: People's Army's meal is like that.
Kim: A meal with sampler of corn grain?
Soldier 1: I wish I could have enough amount of even such meals.
Soldier 2: Even corn meal is better if we could have enough of it. But actually it is less than a sufficient amount.
Soldier 1: It is difficult to say when I think of my superior. But all troops are told to make "self-solution". (*2) The condition is slightly better in the military college. But it is quite hard in my troop because everything, including meals, lacks.
(*2: Note - The state does not give any ration and food supply to the military. Each troop is ordered to solve problems among themselves.)

Kim: I have heard that some troops are in a much awful condition. So you guys are better since you somehow have corn meal though.
Soldier 2: How it will be if we don't even have it?
Kim: But the amount of food is little, isn't it?
Soldier 2: I can't even talk about it because it's so poor.
Kim: Are there many malnourished soldiers in your troop?
Soldier 1: I have heard an area (of troop) in Kanwon Province is much severer.
Kim: How many soldiers in one unit of troop?
Soldier 1: Around 100.
Kim: I guess around 30 percent of 100 soldiers are malnourished, is it right?
Soldier 1: It becomes 50 percent in spring.
Soldier 2: After a while, it's gonna be worse. In potato harvest season (after mid June), we have seven small potatoes for one meal.

Small potatoes, he meant, are the size of a thumb or slightly bigger than that. I think it is not enough amount to fill the hungry stomach of soldiers.

Kim Dong-cheol
Kim is in his thirties and lives in the northern region of North Korea. He started his journalistic activities in 2009 while working as a company driver.

This food shortage is not only the case for his troop. Food shortage and malnutrition are rampant among all troops.
This January, I have heard from my acquaintance who is a regional commissioned officer belonging to Household Command Headquarters (a troop in charge of security for General Kim Jong-il and higher officials) that they have 100grams(=3.5 ounce) of ration meal for a portion. This is a ridiculously little amount. They will be malnourished even if they just sit without moving all day.

In this situation, the government launched massive impressments of rice for the military from the people.