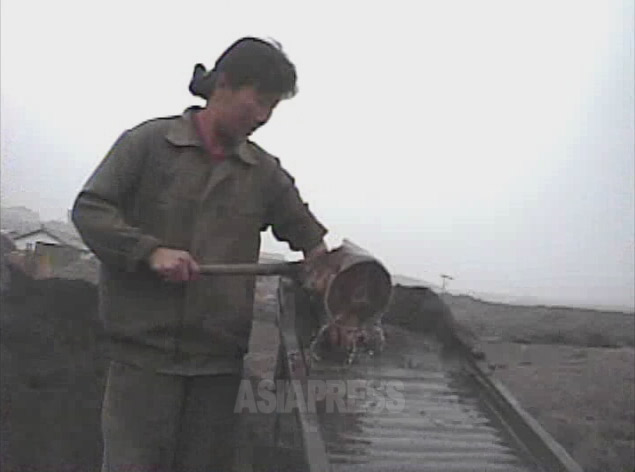 (Photo) A woman panning for gold. There are some who pan for their own profit and some who are hired illegally in groups to pan for gold. In addition, there are independent traders. Photograph taken in October, 2008 in Haeju City, South Hwanghae Province by Shim Ui Chun (ASIAPRESS)

State institutions in North Korea are suffering financial difficulties due to the international community’s economic sanctions. As such, Ryanggang Province’s Workers’ Party organizations, police, and local prosecutor’s office have begun mobilizing citizens to pan the river for gold. With local residents all scrambling for gold, the riverbanks are said to be very crowded.

The reporting partner explained, “Residents can collect up to 1 or 2 grams of gold dust by panning sand at the Unchong River, which flows through the suburbs of Hyesan. Due to sluggish business conditions, poor people and farmers in the area have been flocking to the river to pan for gold.”

Meanwhile, North Korea’s newly rich class, otherwise known as the ‘donju’, is observing the sudden discovery of gold with interest. Apparently, ‘donju’ investors have been asked by the authorities to hire temporary workers to drill deep into the riverbed for gold.

The reporting partner continued, “To monopolize the gold, the authorities are trying to block the public from the riverside and are keeping people away at night. However, locals have been bribing guards for access to the river to take away sand.” (Kang Ji-won)

1 2
Facebook Twitter はてブ Pocket Feedly
RECOMMENDATIONS
Individual transport of grains strictly prohibited ... Private distribution to cities and theft from fields to be highly punished
In North Korea, where harvest is in full swing, the government has dec...
The Making of Rimjin-gang 〈03〉
The Making of Rimjin-gang The Making <01> <02> <03> ...
＜Inside N.Korea＞ Trading Firms Halt Wage Payments Due To Sanctions
2018/Feb/22 The economic sanctions on North Korea seem to be working....
[Video Report] Tighter Sino-North Korean Border Control During Last 20 Years
The border between China and North Korea has been tightened during the...
＜N.Korea Crisis＞ Why is there a Food Shortage Crisis in the Breadbasket Region of Hwanghae? (PART2)
2012/May/10 Written by LEE Jin-suFarming Villages' Crops Taken by the ...
[Video Report] Foot of N.Korean, Japanese Used Bike
◎ASIAPRESS rimjingang YOUTUBE playlistSadong District, where the video...
＜Inside N.Korea＞Enormous Flood Damage at Tumen River Basin, Outcry over No Relief Efforts by Government
2016/Sept/12A huge flood deprived a lot of lives at Namyang Laborer Di...
Exclusion of North Koreans from the Mount Kumgang Tourism Project
Although I have yet to make a visit, I am told that the sight of Mount...
Forgotten Faces: What Happened to the Thousands who Happily Set Sail for North Korea?
Gazing down from the deck of the ship for a picture, some can be seen ...
“Oppa” is Outlawed: Top-Secret Documents Detail Kim Jong-un’s Direct Orders to Eliminate S. Korean Cultural Influence
Kim Jong-un is fomenting hatred of South Korea within the country, ord...