Even in the highest quality apartments in Pyongyang running water is irregular and unreliable
Most of the foreign tourists who visit Pyongyang will be overwhelmed by the cluster of tall-apartment buildings, systematically constructed, and contributing to the importance of Pyongyang as "the capital of the revolution". However, in stark contrast to the ultra modern-looking appearance, the reality of the lives of the residents of these showcase apartments is not as we might imagine. 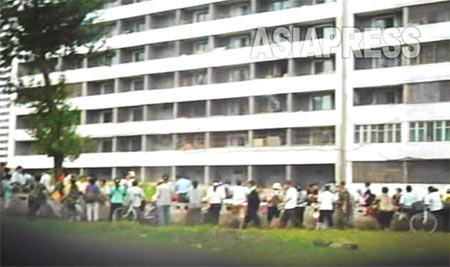 Apartment buildings in Rakrang, the south-west district of Pyongyang. In the narrow street next to the apartment people gather around to buy and sell various items. (Photo taken by Lee Jun, 2007, August) ASIAPRESS

Han Sang-ho, a former employee at the education department and long-term former resident of Pyongyang who left for Japan in 2010 gives us some insight into the everyday lives in the large apartment buildings. For example, there are endless problems with the very basic facilities in these complexes, which on the outside appear well put together. One such challenge is obtaining running water from the facets. This proves to be a continuous battle, as the pumps designed to move water through the system simply do not function. This is due to the irregular electricity output. The result is that in the high-rise apartments that now grace the skyline of Pyongyang, obtaining the most basic of things - a reliable source of running water - is not possible. 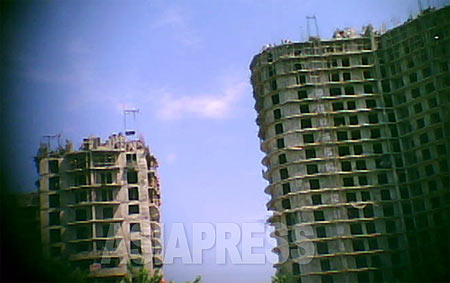 This apartment currently under construction is over 20 stories high. If one looks closely at the windows on each floor it is possible to see the size and placement of each are irregular. (August 2011; Taedong-gang District. Photo taken by Gu Gwang-ho.)  ASIAPRESS 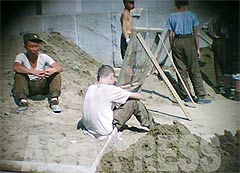 Supper unit sodiers are having a short break at the constrcution site of the apartment complex in Pyongyang. The engineering battalion of the People's Army is usually dispatched to the construction of the government facilities and buildings. (Photo taken by Gu Gwang-ho) ASIAPRESS

Han, commenting on the water facilities in Pyongyang, offered the following t estimony,

"When I lived in Pyongyang our home had a separate water pump installed, during the construction process the pipes were connected but the water was only drizzling from the facet. The problem wasn't the pipes; it was with the electric pump that was supposed to move water through the system.

The power wasn't allowing for it to work effectively. In North Korean homes people need to store water in vessels that they keep in large quantities. On the rare occasions when water does actually flow from the taps, they fill up the containers as much as they can."

Pyongyang is the most privileged place in the country, however, even a person like Han, who was a middle class public worker, has to live in such conditions.

The root of the problem plaguing these modern yet defective apartments is evidenced in several issues: A lack of materials results in low quality and fragile structures. Further, the rush to construct the buildings, led by the engineering battalion and compulsory-mobilized teams from local workplaces, means that basic building requirements are compromised. Implementation of an unreasonable work schedule, in the name of a "the construction battle", spurs the work on but at a heavy price.

Han recalls the beginning of his new life following his arrival in Japan:
"I came to Japan and here power and water are fully available, you can use as much as you want. This is what I could not believe".

Facebook Twitter はてブ Pocket Feedly
RECOMMENDATIONS
＜Inside N. Korea＞ Why is Hunger Getting Worse in June? “Malnutrition has made it impossible to go to work, and some have died from eating wild plants”
The impoverishment of North Korean is getting worse. It has been 1 yea...
[Video Report] People under pressure for requisition of military provision
The North Korean regime has provided the military provision from the o...
＜Kim Jong-un-Xi Jinping Summit＞ Citizen Sentries: Regime Orders Residents to Guard Border, Mobilizes Teens to Patrol Streets
Chinese President Xi Jinping visited North Korea on June 20. Meanwhile...
＜Inside N. Korea＞ Capital Punishment: Foreign Cash Crackdown Feared After Kim Criticizes Citizens’ Neglect for National Currency
◆ Public criticized by Kim for neglecting North Korean bills “Our nati...
＜Latest Report on N.Korea＞People Trapped Behind Barbed Wire (4 Photos)
In late July ASIAPRESS reporter recently visited the Yalu River on th...
[Video Report] What do the ordinary people eat in N.Korea? There are many types of food sold at hawker stalls. (Hawker stalls are individually owned food stalls)
What kind of food is available at hawker stalls in North Korea? In Jun...