◆ Market prices are for Chinese rice

The market price of white rice is, in reality, based on the price of imported Chinese rice. Chinese rice, whether purchased with cash or with exports, naturally comes at a cost to import. When this cost is added to the merchants’ cut, it forms the market price. The market prices for rice in North Korea’s central and northern regions are listed in Chinese yuan, with prices over the last two years ranging from 3.2 to 3.6 Chinese yuan per kilogram.

Most of the rice imported from China is old and from the previous harvest. Due to the popularity of the fresher, domestically produced rice, North Korean rice over the last 20 years has generally cost residents 5% more than Chinese rice.

Stable rice prices indicate that North Korean currency is quite stable too. This is surprising though as, due to the economic sanctions, North Korea’s exports fell by about 90% during 2018. So how has the exchange rate of foreign currencies remained stable in spite of the significant drop in foreign currency imports? To understand that, we looked to the wisdom of economic experts. 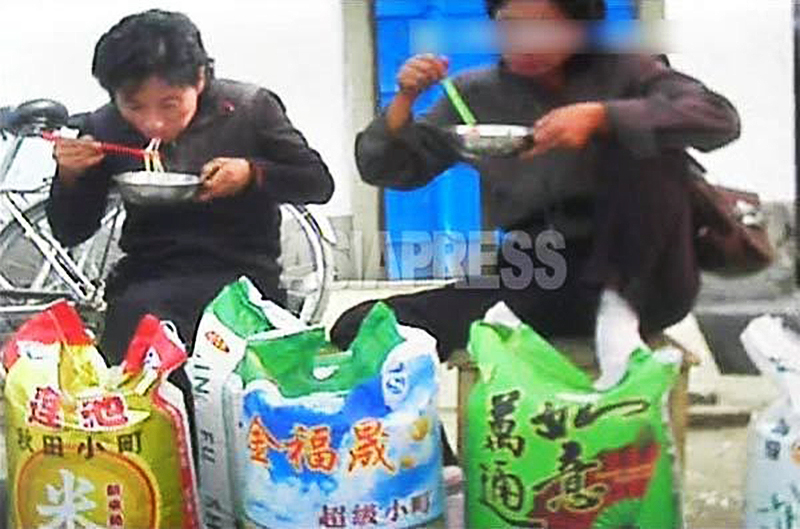 (Reference photo) Chinese rice, mixed with domestically-produced rice, to be sold in larger quantities. When asked, the merchant gives a price in Chinese yuan. Photographed in a city along the northern border in October, 2013 (ASIAPRESS)

◆ Most people are living without the aid of state distributions

At present, the food distribution system in North Korea is close to collapse. Through the existing state system, only employees of the munition factories, some state enterprises, the party, the government administration, the police and other state security organs, and soldiers of the Korean People’s Army receive rations.

Even if an employee does receive rations, dependents such as wives and retired parents are not usually provided for. Indeed, it can be estimated that only about 20% of the population is provided for through the state distribution system.

In recent years, more and more companies are giving salaries and food rations to workers through their own means and at their own discretion. As rice and corn given to employees is not supplied to businesses by the state, enterprises must acquire the food from markets. In other words, employees receive payment “in-kind”, rather than through the state distribution system. Many of the enterprises that practice this form of remuneration are joint ventures with China.

So how do the majority of residents live without the help of the distribution system. Escaping state control, they must make cash on their own to buy food from the markets. The authorities, having lost control of food distribution, now set “price ceilings” for goods at markets, but these decrees are just empty words.
Next page : So who is going hungry...

Next Page： ◆ So who is going hungry?
1 2 3
Facebook Twitter はてブ Pocket Feedly
RECOMMENDATIONS
＜Inside N. Korea＞ Shocking levels of urban poverty forces an increasing number of people to abandon cities to beg in rural areas
In urban areas in the northern part of North Korea, there have been co...
＜Photo Report＞ Abandoned Elderly (PART5) The elderly Treated Useless in N.Korea, the Land of Courtesy toward the Elderly
2016/Nov/07 Koreans respect the elderly, and North Koreans were not a...
Special Gifts For the Worker`s Party Congress “Not enough.”: Only Toothpaste Set & Liquor
The 7th Worker’s Party congress ended on May 9. Despite initial expec...
Kim Jong-un's Starving Soldiers - "Just a spoonful of oil for me..." A soldier pleads for grace
2014/January/24 Written by PAEK Chang-ryong, a defector reporter."Just...
[Video Report] 'Doegurikun' the urban poor who delivers grains from farms to market
The sellers at the Jangmadang are waiting for customers to sell ransac...
＜Inside N. Korea＞ Market survey shows “Resolution 2270”, the toughest-ever sanctions, didn’t work.
2016/Dec/6 For the last seven months, the ASIAPRESS reporting team ha...