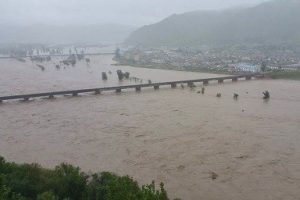 A huge flood deprived a lot of lives at Namyang Laborer District of Onsung County in North Korea. But the authorities’ futile effort to cope with the disaster provoked outcry from the people, reported couple of reporting partners at the region.

“A,” a reporting partner of ASIAPRESS living in the region, covered the damage on September 8: There are number of deaths by the flood at Namyang and it is said that six people are dead at Saebyol County. Two people are said to be dead at Ryuda Island (an island at the mid-Tumen River). People, when asked, are just saying ‘Many are dead, or missing.’

Another reporting partner at the same region said on the phone on the same day, “A military post and seven soldiers were swept away. Four dead bodies were found at Onsung County. If found at the Chinese side, the deaths are handed over after notification. But even there are many missing people, so few are found.”

On September 6, Korean Central News Agency released the news that 60 people are dead and 25 are missing because of this deluge. The damage by the flood in North Hamkyung Province seems serious based on the reports by ASIANPRESS reporters and the released news.

Next Page
1 2
Facebook Twitter はてブ Pocket Feedly
RECOMMENDATIONS
＜Inside N. Korea＞ Homework and Housework: Children Forced to Do Chores and Study From Home with All Schools Closed Due to COVID-19
◆ Families become desperate as economic threat looms larger than risk ...
[Video Report] Chinese products and currency are playing a vital role in N.Korean market
Taken by our team ‘Mindeulle’ (ASIAPRESS) In October 2013, an ASIAPRES...
＜Interview with a North Korean Wwoman＞ Women “Revolt” Against Their Husbands as. Coronavirus MeasuresCoronavirus StrainChanges Marriages Nationwide Relationship [ISHIMARU Jiro]
A year and a half have passed since the COVID-19 pandemic began. Many ...
“We Don’t Want to Meet”: Fearing Coronavirus Infection, China Rebuffs N. Korean Advances at the Border and Delays Resumption of Trade to Late-May
◆ No fertilizers imported for the farming season The China-North Korea...
＜Inside N. Korea＞ A Building Burden: Rising Discontent as Regime Extorts Resources from Residents to Support Tourist Site
◆ “Construct a Special Tourist Zone in the Sacred Birthplace of the Re...
＜Inside N. Korea＞ COVID Confession: Local Authorities Notify Public of Rising Coronavirus Cases in 3 Regions, Including Pyongsong and Sariwon
North Korean authorities are reportedly informing residents for the fi...