How Farmers' Crops are Taken
There are multiple causes of the current food shortage crisis in North Korea's only breadbasket region. Of particular importance is the crisis in the farming villages. Why are people starving to death in a region of food production? I see the main cause as stemming from the allotment taken by the state. Many famers in Hwanghae are being plunged into a situation they cannot bear anymore. 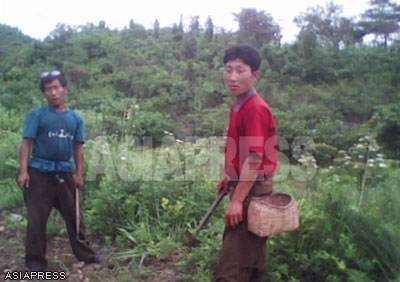 Farmers in a corn field. They are in the middle of planting beans in between the corn. When asked by the reporter if food for this year's rations had been collected yet, they responded that even if they wanted to give something, there were no crops to give yet.
(June, 2010. Photo by Rimjin-gang reporter Kim Dong-cheol) (C) ASIAPRESS

Food Distribution to Priority Recipients Essential
As an advocate of communism, an administrative feature of North Korean is its food rationing system. The government is responsible for guaranteeing access to food, basic everyday items and shelter for everyone. However, the system is in shambles, and since the 1990s, the majority of the people have been removed from of the rationing system. In other words, many more people are living without the "care" of government rations than those living with them.

Currently, the benefits of the food rationing system are limited to only those necessary to maintain North Korea's one party political system. More concretely, benefactors are limited to the Worker's Party and the top brass of the administrative institutions, the Peoples' Liberation Army, the police, the State Security Department, the defense industry, employees and dependants working at the offices of top mines and coal quarries, and the residents of Pyongyang.

In addition to those running the administration, groups responsible for maintaining peace and order required to control the people, workers exporting the mined natural resources that bring in foreign currency, and the city used to showcase the nation's prestige, Pyongyang, are the recipients of a variety of benefits. The majority of these rations are made up of the grains and cereals that are produced by farmers, who make up about 40% of the population . The burden of providing the rations consumed by the army and Pyongyang falls on the major rice producing region of Hwanghae. 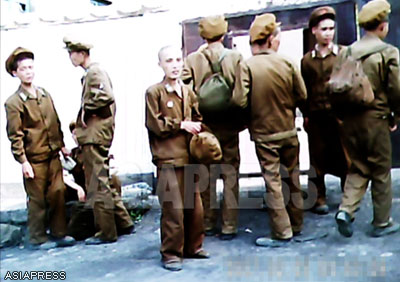 A group of malnourished and emaciated soldiers. They are engineering troops who move at the rear. Units engaged in construction are often undernourished. (South Pyongan Province in July, 2011,Photo by Gu Gwang-ho) (C)ASIAPRESS

Rations for the Military and Pyongyang Come First
Over the last few years, the lives of the farmers have worsened due to increases in the amount of crops collected by the state. Even in this environment, the collection of food for army rations stands out. Despite the economic bankruptcy of the state, the North Korean administration still attempts to maintain its army, which is about 5% of the total population.

There is a shortage of funds, and it is beyond the state's means to feed such a large non-productive group. As a result, the current condition is that many soldiers in the People's Liberation Army are malnourished and struggling.

Another reason there is not enough food to go around lies in the illegal sales of the rations. While priority is given to the army's collection of food for its rations, some food that was intended to be distributed to peripheral soldiers ends up being sold to markets by top military officials. Ordinary people, who do not receive rations, use money gained from commercial activities to buy food.

Top military officials can gain valuable cash through illegal sales of the rations, without the need for side jobs. The result is that food that was intended for peripheral soldiers ends up being sold illegally in markets. This is widely known by the people of North Korea. However, during the reign of Kim Jong-il and even now, the military first policy continues. The tacit approval of these illegal sales serves to give the top military officials material appeasement, but creates the dilemma of how to deal with the malnourishment of the army. In the end, they are forced to increase the amount of food collected for military rations.