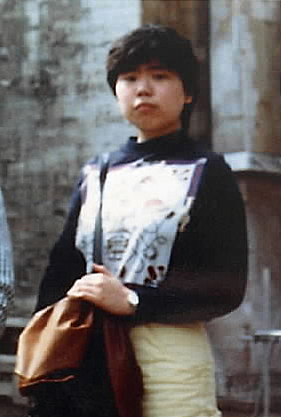 (Picture) Ms. Arimoto was kidnapped at the age of 23 when she was studying in London (Photograph provided by her family)

January 12 marked the 59th birthday of Keiko Arimoto (有本恵子), a Japanese citizen who has spent most of her life as a captive of North Korea. Abducted and brought to North Korea when she was just 23, Ms. Arimoto was forced to teach her language and customs to generations of North Korean spies, as her own government failed for decades to negotiate her release.

I am saddened each January when I reminded of Ms. Arimoto's birthday. I think of how close our ages are and how we are both from the Kansai region of Japan. I imagine her parents, at similar age to my own, and the incredible sadness they must feel as they face the fact that they are running out of time to be reunited with their daughter. The lack of progress in bringing her back is especially frustrating. Since the return of Hitomi Soga (曽我ひとみ) and her family in July 2004, no administration has made further progress in resolving the abduction issue.

If Japan had made better political and diplomatic choices, could more progress have been made? Would balanced reporting by the media have helped avoid the current stalemate? No one can be certain.

After Kim Jong-il acknowledged the abduction of Japanese citizens in September 2002, with the admission that "eight [Japanese] people died and four did not enter the country", public sentiment in Japan urged for retaliation and punishment to be carried out against North Korea. Expressions such as 'pay back' and 'strangle North Korea' filled the headlines. Those who, instead, argued for consultations on the issue to be prioritized were referred to as "betrayers of the country" or "North Korean bootlickers”.

There were numerous politicians who made similarly inflammatory remarks. Shingo Nishimura (西村眞悟), a former member of the House of Representatives, and Ishihara Shintaro (石原慎太郎), the former Governor of Tokyo, made the irresponsible claim that, “If Japan were to implement economic sanctions, North Korea would collapse and the abduction issue would be resolved.”

Next page: The danger of emotional diplomacy…

Next Page： ◆The danger of emotional diplomacy
1 2
Facebook Twitter はてブ Pocket Feedly
RECOMMENDATIONS
＜Inside N. Korea＞N. Korea takes issue with high school students taking videos of kissing, dancing, fighting, and harassing the homeless
North Korean high school students have long taken videos and pictures ...
＜Inside N. Korea＞ Student absenteeism on the rise due to excessive requisition from school; a third of students are absent from school in local cities.
2016/Dec/19 Recently the number of student absenteeism has grown in l...
Jang Song-thaek’s Ambition Reflected on Photos (part1)
Analysis of North Korean Media ISHIMARU Jiro, editor of Rimjin-gang, P...
＜Inside N. Korea＞ Fear and Tension among the Police: Authorities Order the Eradication of Bribery With Threats of Punishing Officers and Their Families
The North Korean authorities have decided to strengthen punishments fo...
[Video Report] People under pressure for requisition of military provision
The North Korean regime has provided the military provision from the o...
[Video Report] Fleeing back alley vendors by cracking down
Reporter, Koo Gwang-ho of ASIAPRESS, recorded a video on street vendor...